With temperatures set to rise on the coast, it was time  to move towards the mountains where although we’d once again experience colder nights the daytime temperatures of early to mid twenties were set to be perfect. The area of Tafraroute in the Anti Atlas Mountains had long been on my radar and it had only been the reports of people waking up in sub freezing temperatures that had stopped us heading in that direction sooner.

Morocco is certainly a land of ever changing faces and landscapes and often driving to a place is as rewarding as the place itself. From our location in Sidi Ifni on the coast we had the choice of two routes either north via Tiznit or inland via Guelmin. We chose the latter as it merited a stop not for it’s well known camel souk, on this occasion we’d just missed it, but for it’s Marjane supermarket. Our last supermarket shop had been several weeks ago when we left the desert and stopped in Erachidia, conditioned as we are in the west to get everything under one roof I was actually once again getting excited at the prospect. Although we’d managed perfectly well shopping at local stores, the greater variety of products on offer at the larger stores can help vary our diet a little more.

Drives in Morocco can be pretty spectacular 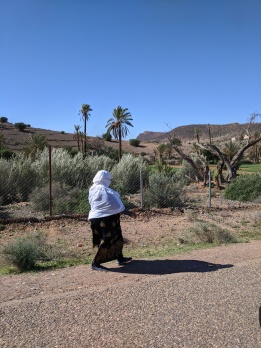 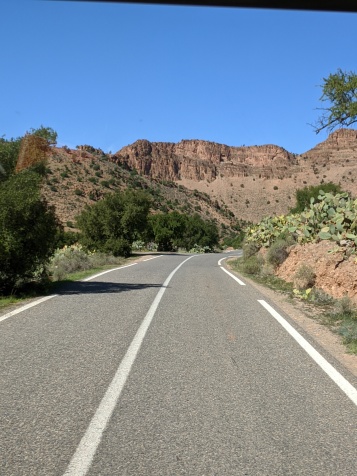 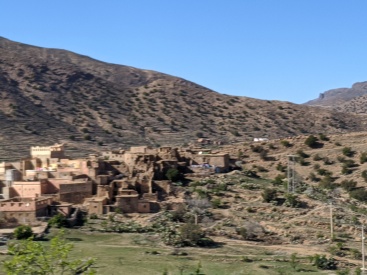 A couple we’d met at Sidi Ifni Steve and Trish had asked if they could follow us up to Tafraoute and so in tandem we started our journey. There’s a new road to Guelmin and the freshly tarmacked road was a delight to drive especially by Moroccan standards. It was only once we got out the other side and started our climb towards the mountains that the terrain became a little more challenging. Don’t get me wrong it still wasn’t a bad road by Moroccan standards, for starters it had tarmac although the sides of the road had been worn away so much that it was now single track so when we met vehicles coming in the other direction one or both of us had to drop down the lip off the road and onto the gravel verge. This almost became a game of cat and mouse as the Moroccan vehicles showed no sign of wanting to compromise and move over, it was a battle of wills as the oncoming vehicles got closer and closer before either they would give in or mostly we would! At one point we were following a lorry laden with huge bags of charcoal, I’d just remarked to Paul that the load wasn’t secured and low and behold shortly afterwards one of the huge sacks of charcoal had rolled off the top and bounced along the road in front of us. Fortunately we were not driving too close behind and so managed to avoid it. Had the driver not stopped though we would have become the proud owner!

Around 200 km’s from Sidi Ifni Tafraoute is nestled in a valley in the Anti Atlas Mountains, the secluded oasis is surrounded by incredibly shaped rock formations and once you arrive after the long drive you will realise it’s worth the effort to get there. I thinks it’s quickly moved to our number one spot in Morocco. Although the town has several campsites there’s also an official wild camping spot in a vast open area in the palmeries which each winter becomes home to an ever growing number of European motorhomers. Ever entrepreneurial the locals have seized the opportunity to make a living from this and so almost everything you need can be obtained without even leaving your van, the local baker is the first call you hear each morning with his shouts of bread, pan macaroons as he tours the site on his bike, followed closely by sellers of argan oil, honey, amlou,  there’s a mechanic and body workshop that calls along with guides for tours and even a guy with a water bouzer who fills your tank. You certainly won’t go hungry here either as local women offer home cooked hot meals of cous cous, pizza or tagine, there’s also pancakes and harira soup, all delivered to your door. With no facility to empty black waste (toilet) though we are led to believe that lots of visitors used a kind of trough on the site to dispose of this previously (yuk), the town obviously recognised that the visitors provide a lot of business  and without it several locals would be struggling to make a living so they have now installed a European style service point just up the road from the site where you can empty free of charge and refill with water for just 10 MAD (around 8p).

The parking in Tafaroute and the twice daily visitors from the goats who got well fed there! 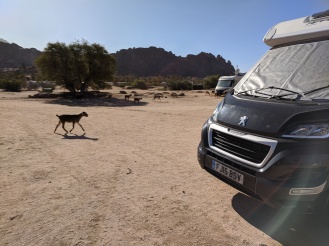 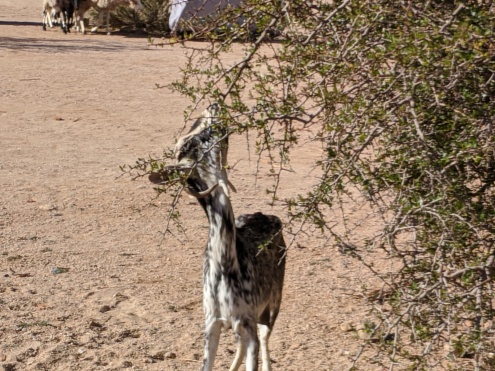 The highlight of our stay though was when we were invited to the home of Fatima for tea after giving her some items of clothing for her grandaughter. We felt thoroughly spoilt as they laid out a table with a small feast of homemade delights. It’s courteous when visiting a locals home to take a small gift and so knowing that Moroccans have a sweet tooth I made of lemon drizzle cake for them to try.

Being invited to tea in a locals house – A priceless experience 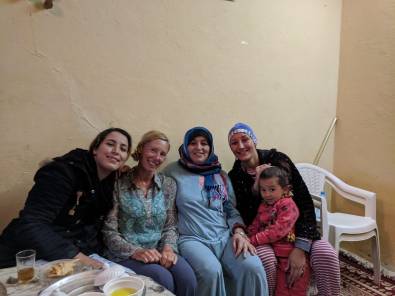 Tafraoute was like a reunion of people we’d met previously on our trip, firstly Daniel our Dutch friend who we first met at Algeciras, then subsequently in Asilah and Moulay Bouselham arrived, a German couple Christiana and Erghart who’d been parked next to us at Sidi Ifni also came the same day, then a few days later Wayne and Elizabeth the Ozzie couple we’d hooked up with a Christmas arrived. Even though Morocco seems like a big Country it’s surprising how many people you meet up with several times. Having sourced two lots of logs for fires whilst there, it made for a sociable stay with several evenings spent having BBQ’s and then a campfire whilst sharing stories.

Enjoying life by the campfire 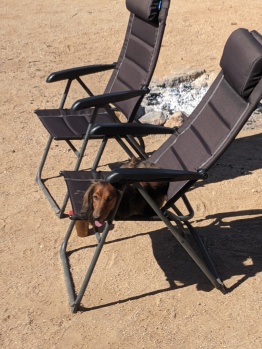 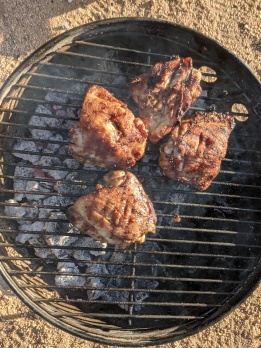 Cupped in a shallow bowl between rocky outcrops, Tafraoute has something serene about it, a perfect balance uniting nature and man. It has a magical feel and looking out of our campervan window at the rock formations all around it almost felts like we were in the middle of a film set.

Tafraoute has a lot to offer locally and although there’s lots of visiting motorhomes in winter there are hardly any other tourists so whatever you want to do when in the area you can do it in peace without the fear of faux guides or hassling shop keepers.

Shopping  The town is just a short stroll from the parking area and is a joy to explore. Known for it’s shoe making it won’t be long before you discover the street that they all align,  this is the place to choose a pair a handmade leather shows at a fraction of the cost that you’d pay at home, or even design your own and have them made. Although you will also come across an area of butchers and an area of veg stands the town really comes alive on a Wednesday when it hosts it’s traditional Souk. Anything from live animals, fresh honey, sweet nougats and household goods are all available here. It’s always worth a haggle you will know pretty soon whether the vendor has already given you their best price. Some naturally try it on, others (particularly food vendors) just charge you the basic price. And don’t forget to ask to taste their wares they are only too willing to let you have a try to secure a sale. We brought the most delicious honey after sampling several. A kilo for just 60 MAD around £5. 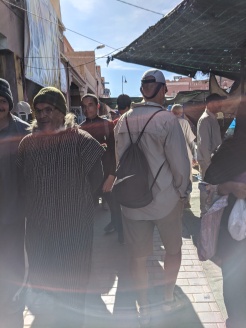 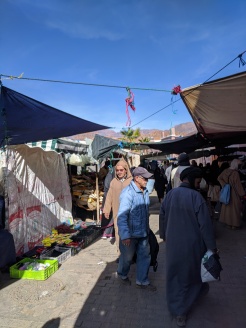 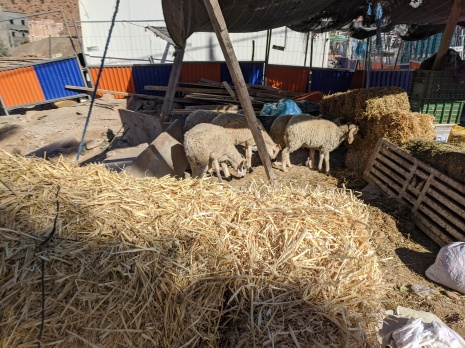 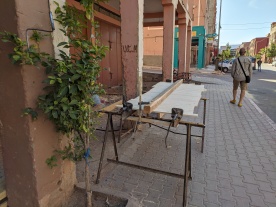 The Amlen valley just a short bike ride outside of the town, there’s reportedly 26 villages nestled here and all overlooked by the rock formation known as the “Lion’s Head”. You will know it when you see it as it can’t be mistaken. At this time of year you will also see dozens of Almond trees in blossom ahead of the Almond Festival at the end of February.

The almond trees are in full bloom & The Lions Face 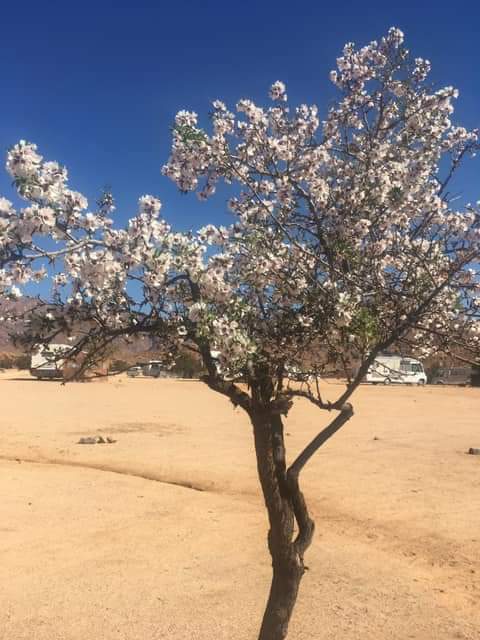 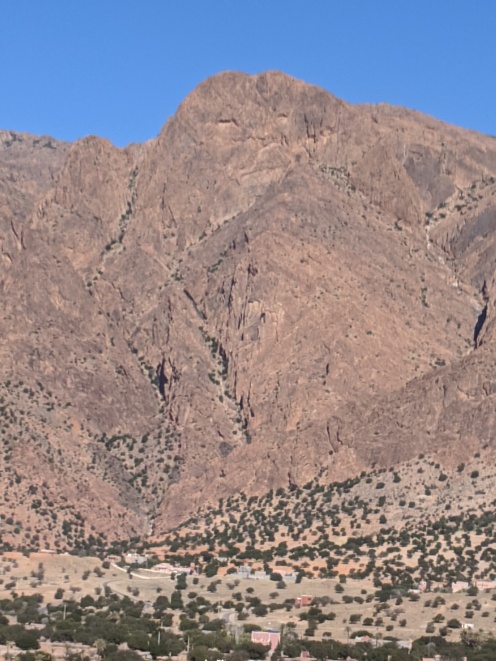 Amlou is a mixture of almonds, olive oil, argan oil, and honey it’s usually served for breakfast or as a snack with bread at other times of the day. The work that goes into producing both the almond paste and the Argan oil is tremendous and you can see why by Moroccan standards it’s priced on the high side. We couldn’t resist though and although you can by it ready mixed at the local cooperatives we opted to buy the ingredients separately and make our own. The paste from the almonds leaves a thick coating on the roof of your mouth when it’s not mixed but is bursting with flavour. We opted to buy ours from a small vendor who we witnessed grinding the almonds on the premises.

The red-granite mountains that surround Tafraoute are not a walk in the park, so they’re not recommended for light walkers or beginner hikers. However, if you are looking to get in some physical exercise and get to know one of Morocco’s most spectacular regions, Tafraoute and the Anti-Atlas Mountains offer numerous possibilities, including Jebel Kest, the highest peak in the region.

These “Painted Rocks” are undoubtedly one of Tafraoute’s most iconic symbols. Painted in 1984 by Belgian artist Jean Verame (who repeated the feat in Texas) with the help of a local team of some 20 firemen, the rocks provided the perfect canvas for a multi-colour piece of art. They can be reached by road (the last 2 km’s is piste but more than driveable) and are around 9km’s from the town (we went by bike and it was mainly uphill on the ay there which made the ride back easy). Recently repainted the rocks more than stand out on red landscape. Now I know art is a very subjective subject, but we found them more of a blight on the landscape rather than a sight that enhanced it! Sorry Jean Verame , but we just didn’t get it!

The Painted Rocks, is it just us or are they spoiling the landscape rather then enhancing it? 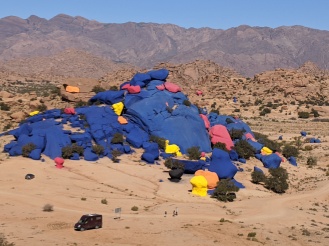 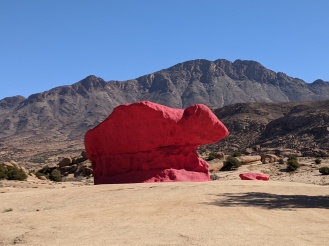 Another rock formation which you can take in enroute to the painted rocks is the one known as Napoleons hat. With the French having occupied this land for so long there had to be one somewhere. See if you can make it out in the picture below. 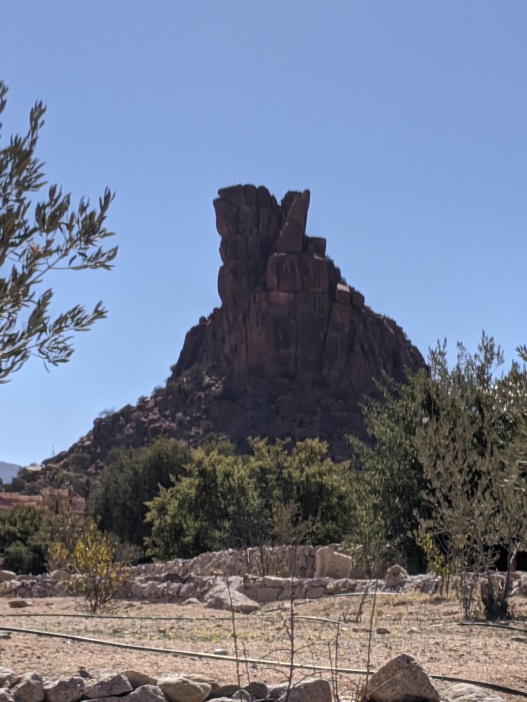 We opted to visit the home of Ali at Chez Nadia. This cute little restaurant is tucked away down a small alley outside of town (it’s shown on maps me though), but well worth seeking out. A basic menu of either meat or chicken tagine or cuss cuss it is a perfect place to sample authentic Moroccan cuisine in quaint surroundings. You can also sample the local Amlou here as they serve some along with bread whilst you wait for your food. Although they don’t serve alcohol they are happy for you to take your own. At only £4.50 for a main meal it’s really not worth cooking! 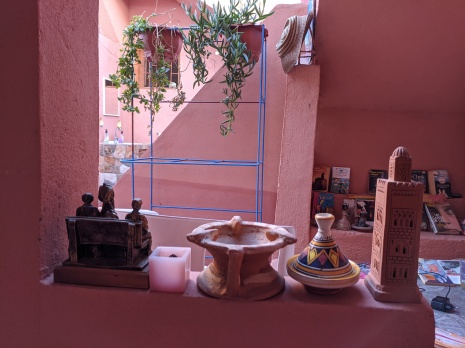