Well that’s it then Adios Spain and a whole new Country, Culture, tradition and gastronomy awaits us in France. Having studied French at night school around 20 years ago I was looking forward to getting reacquainted with the language and relearning all I have now forgotten after such a long time of not using it. An exciting journey ahead and tickly tummy all over again.

We have now put away our Spanish guide book and taken out our French Rough guide which is that fat that we could use it as an alternative to a brick should we need one. I know we can now get all our travel guides on our kindles, but for some reason it just doesn’t work for me. I like to be able to thumb through the pages going back and forth to relevant maps and so on, my guide books often end up more than a little dog eared with post it nots galore of must see places. So after a brief thumb through our first stop was to be Collioure just over the border. After setting the sat nav a driving for a few hours we neared our destination. The aire was out of town but had a shuttle bus which ran in every 30 minutes. As we were making our way there we spotted another aire en route about 2kms nearer the town so decided to pull in (GPS N42.312314 E03.035869). Although located right next to a cemetery the views down to the coast from the top terrace were amazing and at 10 euros a night inc services it wouldn’t break the bank.

We parked up next to another van from the UK and after introductions with the owners Diane and Keith we all headed off on the free shuttle into town. Unfortunately 2 weeks before whilst in France Diane had come off her bike and was sporting a broken shoulder, thumb and hip so having had an operation to remove bone from her shoulder and put pins in her thumb mobility was still more than a little difficult for her.

Collioure is a beautiful small coastal town with palm trees lining a curved beach and several small coves beyond thet. The town is dominated by the Chateau Royal which was founded by the Templars in the 12th Century. With a pretty harbour where coloured boats bob around in the water it really captured my heart. After a wander around the narrow streets and a pit stop for a cold beer we headed back for the bus late afternoon at the same time as Diane and Keith were finishing their lunch. The 4 of us got together in the evening and got to know each other over a few wines accompanied by a selection of cheeses and meats. Although originally from Kent the 2 of them have lived in Inverness for most of their married life and have been motorhoming in France for the past 11 years. Having recently retired though this is their 1st long trip and so doubly unfortunate that Di had managed to sustain such an injury just a couple of weeks in. 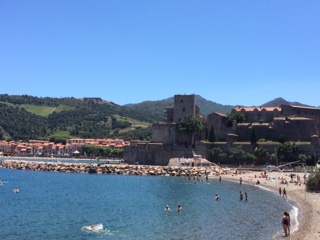 After a good sleep in (waking up at 9.50am) probably helped by the wine the night before. Paul and I caught the bus to town for some snorkelling. For some reason the sea seemed especially cold here to us and although it was tempting to slowly tiptoe in, we braved in and jumped straight in. Having snorkelled one bay we moved around the corner to the next and then spent ½ hour drying off before hopping on the bus back. With the sun beating down we were grateful that our parking spot was shaded so we were able to sit outside all evening. We had a joint effort on the BBQ in the evening  of pork and souvlaki chicken with salad and sweet potatoes with garlic. As we sat enjoying glasses of wine and sharing stories we noticed more and more cars pulling into the parking area full of young people. As we had experienced groups of young people partying in car parks at weekends in Spain we were a little worried. An hour or so later some booming music started from a nearby venue and continued until 5am in the morning!! Note to selves DO NOT PARK HERE AT A WEEKEND AGAIN!!!

Feeling groggy the next morning we moved off not wanting to risk the possibility of another sleepless night . We said our goodbyes to Diane and Keith (although we’d arranged to meet up with them again for a night or so the day after) and we made our way to Homps a small village on the Canal Du Midi (N42.53578 E002.59796) a free aire. The Canal Du Midi stretches 240 kms and with the parking being adjacent to it we had great views of the water and could watch the coming and going of the boats. The village of Homps was just a short stroll away and although only small seemed to house 3 churches! After a walk around the local area we spent the evening challenging each other a Boules which we had recently acquired. Well actually I don’t think I was much of a challenge as Paul won all 3 games!!! Obviously I need more practice.

Homps and the Canal Du Midi 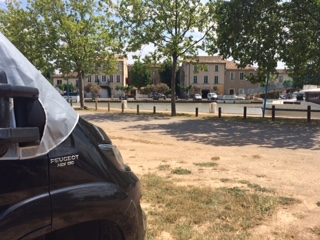 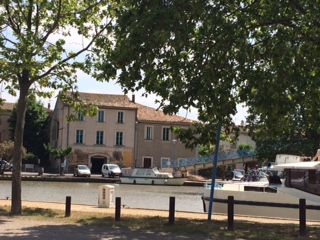 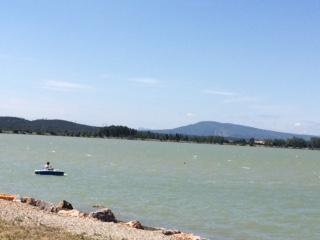 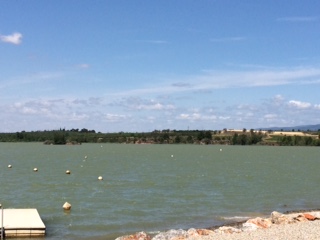 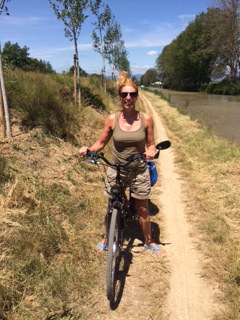 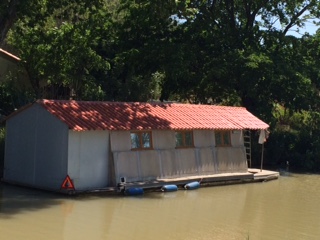 The following day Keith and Diane came to meet us there and after Paul and I enjoyed a bike ride down the canal and to a nearby lake, Diane had prepared a chilli pepper pasta for us all to share for dinner accompanied by homemade garlic bread.

Whilst playing Boules in the evening we met Gil the owner of a campsite around 10 kms away in a small village called Bize (Camping Cesse N43.185707 E02.520993). He had come to let the motorhomers parked there of his site and after finding out that there was a bar in the village that would have the important football match on of England V Iceland the following evening we decided to all go there the following  day.

After shopping on route we arrived at the campsite mid morning and before checking in Paul and I walked into the village to make sure the football game was on. The bar was closed though so we couldn’t check it out for sure, but decided to stay anyway and hope for the best. We pitched ourselves next to each other and pretty much had the choice of where to stay as there were only a couple of other pitches taken at the time. The campsite is located in a small village with a fresh water river that you can swim in together with a handful of restaurants and a shop with fresh produce. Gil the owner came to greet us a little later and offered us a glass of local wine to welcome us to his site. Each day he made time to come and speak to us and was full of information about the local area and beyond. Please if your reading this and are in this area support Gil by visiting his campsite, he has to be the most hospitable host we have met on our travels. After a chill out afternoon we went off to the bar with anticipation of an England win to go through to the next round of the Euros – we should win after all we were only pitched against Iceland. Alas disappointment struck again as we went lost 2-1. Still at least the bar served decent wine!!!

Wash Day all round in Bize!!!