After a rather eventful end to our trip back to the UK, which involved us pulling out of one of the tenancy agreements at last minute and having to re-market  the property, a hospital day procedure for my aunt ending up with being admitted and having emergency surgery and a gas leak from the meter the day our other tenants moved in which involved an emergency call out by national grid. We were relieved that the hiccups were sorted (or on their way to being) and we could take off breathing a sigh of relief.

We had opted for the Plymouth-Santander route this time as the travelling time on board was 4 hours shorter than the Portsmouth route which meant we would arrive at 1pm giving us time to shop and still get to our chosen aire in daylight. We broke the journey with an overnight stay on a pub car park (The Highwayman) at Shepton Mallet. Paul wanted to get his last fix of Rugby before leaving British shores so hunted around for a pub which had both sky sports and food. As it was for a worthy cause after 4 telephone calls he announced his plan and that was that. Of course we arrived in plenty of time for the match and as he went off to watch England beat the Aussies I stayed behind and sorted stuff out in Boris that I hadn’t had chance to do before leaving, joining him in the pub early evening for a bite to eat.

We completed the journey the following day arriving in Plymouth in plenty of time to pick up some last minute essentials from the supermarket (there are still some things we can’t get whilst away so stock up on until they run out) and have lunch before heading to the port. I really don’t relish having to spend 20 hours on a boat, but we were incredibly lucky once again with the crossing as the weather and sea were very calm and so it all passed very easily and suddenly here we were again on Spanish soil. With the sun shining and the temperature gage rising to 22 degrees we couldn’t wipe the smiles from our faces.

Calm sea’s on the way to Santander 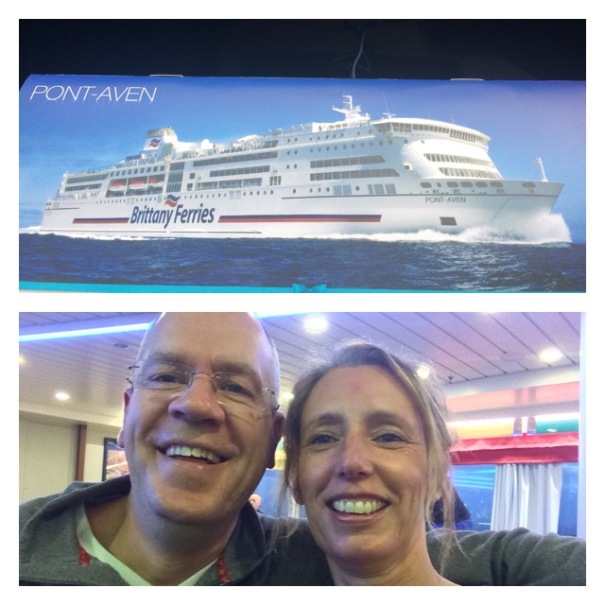 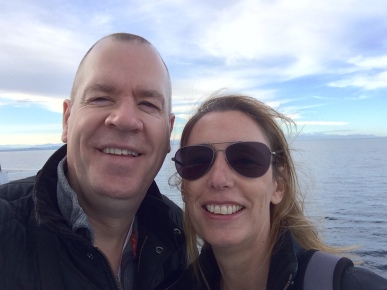 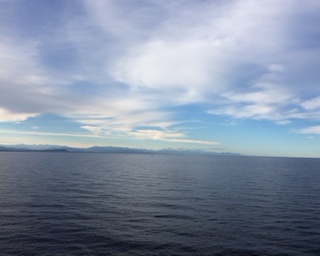 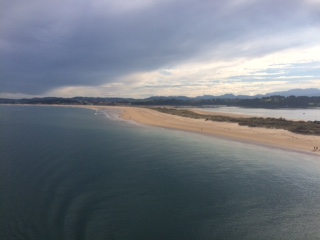 After a whizz around the supermarket (as we found on that there are 2 bank holidays coming up this week when they will be closed) we headed for Cabaceno aire  (GPS 43.358534 – 3.818869) a free parking area just 20 mins drive from Santander, located next to a wildlife park. This was also the very first stop on our 1st trip out in January.  With Boris parked up, we strolled up to view the elephants in the park and make the most of the late afternoon sunshine. As soon as the sun disappeared around 6 pm though the temperatures dip so we made sure we were back indoors with the heating on. Both of us felt instantly at home and relaxed, it almost feels like we haven’t been away! 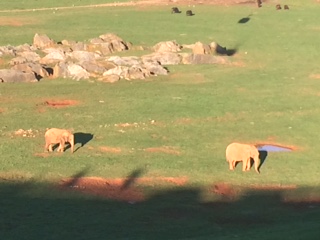 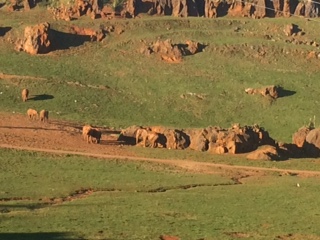 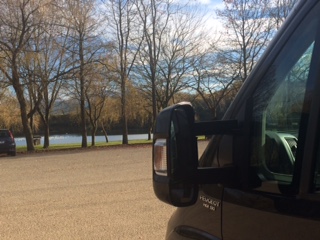 With the forecast looking good for the following day we decided not to move on, so after spending the morning cleaning the outside of Boris who was rather dirty from the mucky weather back home we had lunch alfresco (not bad for early Dec in northern Spain) and got back into the swing of relaxing with a game of boules which I got thrashed at (obviously out of practice) followed by a frisby throwing contest (I wasn’t much good at that either!). The evening was spent with maps and books planning where we go next.

The following morning we were up early with the intention of getting away to our next destination of Salamanca just after breakfast. This was delayed somewhat when we realised after showering that our bathroom had developed another leak (this was recently re-sealed when back at the dealers & hadn’t leaked when we tried it out back home), after a fraught tel call back to them, they suggested that we firstly try and seal it ourselves (well Paul does) and if that doesn’t work we will need to get it looked at out here somewhere. The main problem is finding where the water is managing to escape from! So it’s now on the “To Do” list for when it’s dried out completely in a few days. In the meantime we’ve got travelling to do and fun to be had. With the delayed start and a stop for a roadside lunch on route we didn’t arrive in Salamanca until around 4pm. Known as the most graceful city in Spain, it’s a compact city and easily explored on foot. Overnight parking for us was just in a free car park 10 mins walk from the centre (GPS 40.954897 – 5.668572). With the forecast looking iffy for the following day we headed straight out to explore the magnificent Plaza Major a grand central square and impressive cathedral. After exploring we hunted around to find a  tapas bar as by now we were hungry and didn’t want to wait for food to cook. We were treated to delights such as Oxtail risotto, tempura vegetables and cod au gratin. 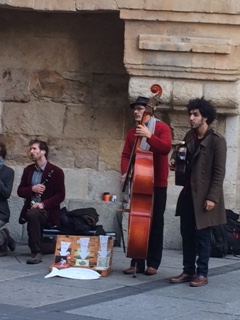 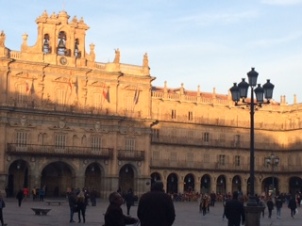 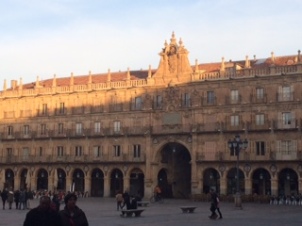 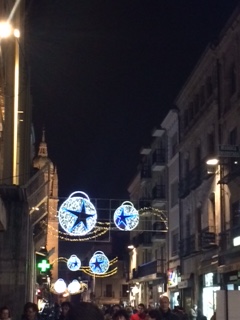 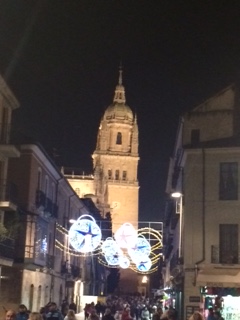 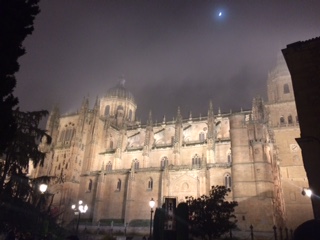 Panic over – Santa knows where we are (I had a word) this is proof! 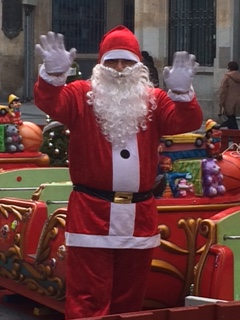 After a good night’s sleep helped a little by the 3 glasses of wine consumed with the tapas, we woke up to a very chilly van, the temperature overnight had dipped to 1 degree and when we peered outside there was a blanket of thick fog. 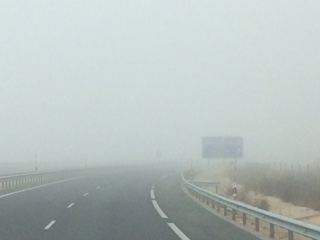 Having seen the majority of the sites the previous evening we decided to head off to somewhere a little warmer. A four hour drive got us out of the fog and cold and to Merida a Spanish place famed for its Roman ruins (it contains more than any other city in Spain). The aire here is located close to the town centre and has all services and charges 12 Euro per night (GPS 38.919427 – 6.33747). After the drive and lunch we didn’t get out until around 3pm, but this gave us ample time to walk around the majority of the sites. A combined ticket costs 15 euros and can be used again the following day. With the weather a warmer 15 degrees we set off to explore. The sites are impressive transporting you back to an era 2000+ years ago and you cannot fail to be impressed with the magnificent structures they built even if history isn’t really your thing. Paul’s fit bit (that he had as a wonderful surprise belated birthday present from his brother whilst we were back home) told us that we had walked around 8 ¼ miles in all so we should sleep well tonight. With the sun having long disappeared and me regretting not having taken a coat or gloves we made our way back to Boris for dinner and to get cosy. 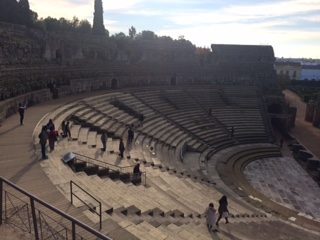 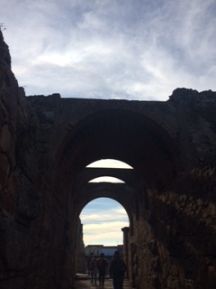 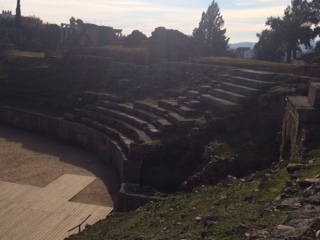 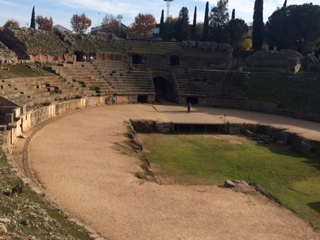 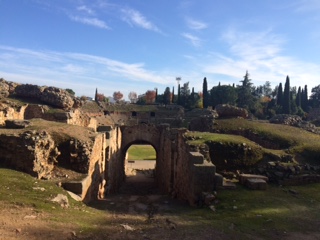 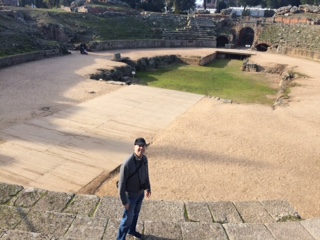 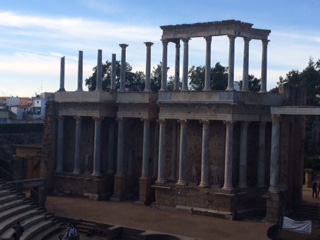 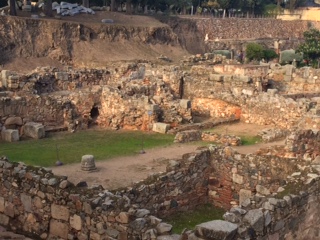 With Saville in our sights for our next stop I think we may clock up some more miles this weekend.

Until next time Andi & Paul x