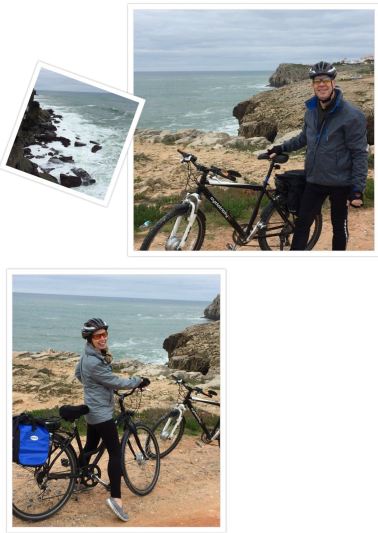 When Paul first mentioned electric bikes as a possible option for us on our travels, I can remember pulling a face at the idea as I envisioned an undersized bike that a generation much older than ourselves may opt for. I wanted a bike that would keep me fit, not one that did all the work for me! Paul continued with his research none the less and some weeks later dragged me in front of the PC to take a look. He had shortlisted Cyclotricity as his number one choice for several reasons:

Now he suddenly had my interest, after all I was always the first to be hopping off my bike and pushing it when we came to a big hill. After further investigation we found a stockist in Leicester who made arrangements to get hold of the two models we were after “Revolver” for Paul and “Sahara” for me so that we could test ride them.

The weight of the bikes was a serious consideration as they had to be carried on our motorhome bike rack which is only designed to carry a maximum of 50kgs. As these were not much heavier than normal bikes they seemed to fit the bill.

A drive to the dealers and our subsequent test drive sealed the deal for us. Although we took the opportunity to test ride several others whilst there, the Cyclotricity models were still our clear favourites. Not only did they have the option to ride them as a normal bike, they also had both a power assist mode (which makes pedalling easier) with the option of low, medium and high settings dependant on how much assistance is needed! Generally speaking the bigger the hill for me the higher the power setting! Ours also have a power only option where we can operate the power via a ‘thumb throttle’ – this has proved very useful when pulling out at busy junctions.

We have now had the bikes for 18 months and would seriously not be without them. They act as our transport once our motorhome is parked up, allowing us to discover the locality or go  shopping without the challenges of moving and parking our 25 ft motorhome every time. They have allowed us to cycle much greater distances than we would have ordinarily done (our longest so far being 42kms (over 26 miles) in France last year) and if used on power assist they can go for over 50 miles on one charge.

What has prompted me to write this review after owning the bikes for 18 months is the excellent customer service we have recently received from Cyclotricity after encountering a problem with Paul’s bike whilst in Spain. The company went above and beyond to help with the issue, even sending the part on to a campsite in Spain for us.

Not only have we made great choices with our cycles, we have also made an excellent choice in the brand.

So a HUGE thank you to Raj and colleagues at Cyclotricity, you deserve every success.