If your vision of Spain is the “Britishness of Benidorm” then think again as there is so much more to this vast country. People often have an image of the Spanish holidays of the past with Sombreros and donkeys sold by the dozen at kiss me quick resorts on the Costas.  After spending the last almost 5 months (or 116 days to be precise) in Spain, we have experienced a country full of culture, traditions, fiestas and breath taking scenery.

Here are some of our highlights

Merida, capital of Extremadura, was once also capital of the Roman province of Lusitania, and is still home to the most impressive and extensive Roman ruins in all Spain. The ruins lie sprinkled around town, often appearing in the most unlikely corners, and one can only wonder what still lies buried beneath the lively, modern city. 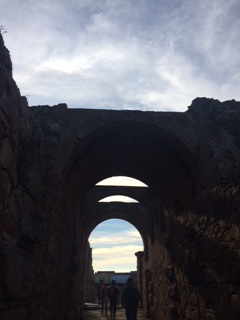 El Rocío, is the most significant town in the vicinity of the Parque Nacional de Donana. At first it can’t help but surprise first-timers (us included). Its streets, unpaved and covered in sand, are lined with colourfully decked-out single-storey houses with sweeping verandas, left empty half the time. But this is no ghost town: these are the well-tended properties of 115 hermandades (brotherhoods), whose pilgrims converge on the town every Pentecost (Whitsunday) weekend for the Romeria del Rocío, Spain’s largest religious festival. And at most weekends, the hermandades arrive in a flurry of festive fun for other ceremonies. It’s quite normal to see “Cowboy” like figures on horseback taking a drink outside one of the towns numerous bars!

When you’re surrounded by such cultural luminaries as Cadiz, Jerez de la Frontera and Seville, it’s easy to bypass this town just across the bay from Cadiz; such is the fate of El Puerto de Santa Maria, despite its collection of well-known icons. Osborne sherry, with its famous bull logo (which has become the national symbol of Spain), was founded and retains its HQ here, as do half a dozen other sherry bodegas. With its abundance of good beaches, sherry bodegas, elaborate cuisine, weighty bullfighting legacy and smattering of architectural heirlooms, El Puerto can seem like southern Andalucia in microcosm, but we found this town beyond friendly with a charming atmosphere on the lead up to Christmas. 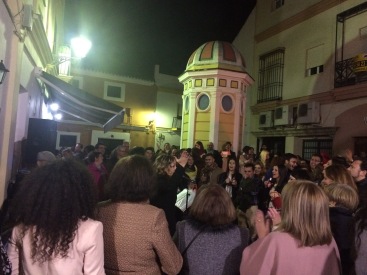 Perched on an inland plateau and dominated by the 100m gorge of El Tajo, Ronda is Malaga province’s most spectacular town. Established in the 9th century BC, Ronda is also one of Spain’s oldest towns and it boasts a superbly dramatic location. But don’t miss out on the surrounding towns and villages, Grazalema and Olvera both were  particular favourites of ours. Few white towns are as generically perfect as Grazalema, with its spotless whitewashed houses sporting rust-tiled roofs and wrought-iron window bars, sprinkled on the steep rocky slopes of its eponymous mountain range.  Olvera, dramatically topped by an Arabic castle, beckons from miles away across olive-covered country. Most come to Olvera for the Vía Verde de la Sierra (a disused rail track made in to a cycle path), but as a white town par excellence, it’s renowned for its olive oil, striking neoclassical church and roller-coaster history, which started with the Romans. 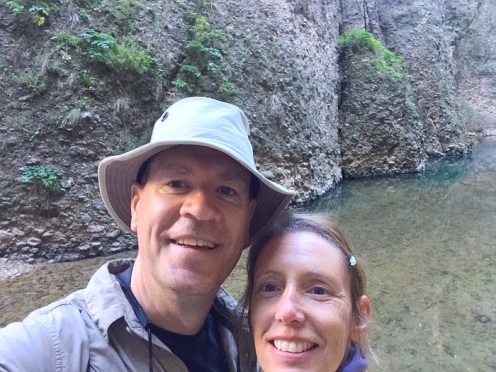 El Chorro gorge is particularly famous for the Caminito del Rey (King’s Path) so named because Alfonso XIII walked along it when he opened the Guadalhorce hydroelectric dam in 1921. The path had fallen into severe disrepair by the late 1990s and became famously known as the most dangerous pathway in the world. After extensive restoration and a €5.5 million tab, it reopened in March 2015 and there is now an entirely safe new walkway (with barriers) that is open to anyone with a reasonable head for heights.

The path hangs 100m above the river Guadalhorce and snakes around the cliffs, affording truly breathtaking views at every turn. In some sections the old crumbling path can be spied just below the new boardwalk although you wouldn’t have caught us on their previously! 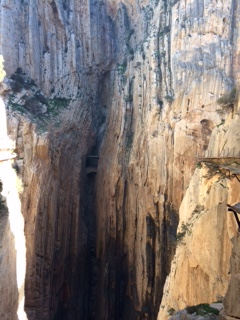 South of Antequera are the weird and wonderful rock formations of the Torcal national park. The gnarled, serrated and pillared limestone was formed under the sea 150 million years ago and now rises to 1336m. There are two walking trails, but wear shoes with good tread as the trails are rocky and when we were there in February very muddy. 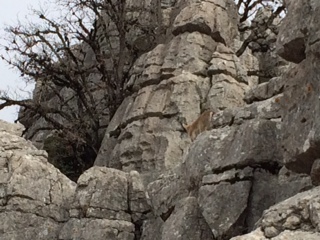 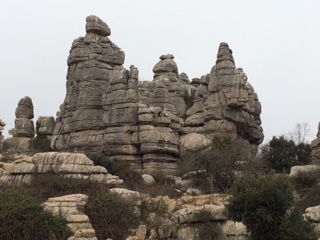 Granada’s dramatic alpine backdrop is the Sierra Nevada mountain range, which offers over 100km’s of piste to ski. Only a couple of hours drive from the coast, its wild snow-capped peaks include the highest point in mainland Spain. It just had to be done! 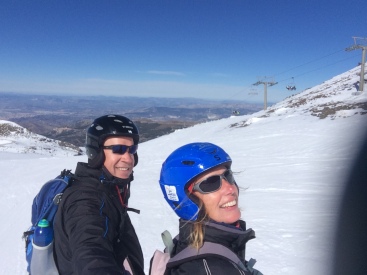 Set in between two picturesque bays this location is all about the sea, the sunrises and sunsets and the stunning scenery. Breath-taking! 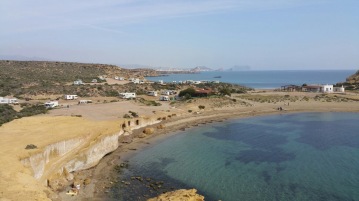 Across Andalucia in February cities and towns come alive with the Carnival.  Reportedly one of the best in the region, Aguillas comes to life with a party atmosphere. A cross between the famous carnival of Rio De Janeiro and Notting Hill the street burst with entertainment with 5 hours long parade that fills the streets with music, dancing and costume. Paying for seating is our top tip as the 10 Euros investment means you can enjoy the whole party in relative comfort –  it’s a no brainer! 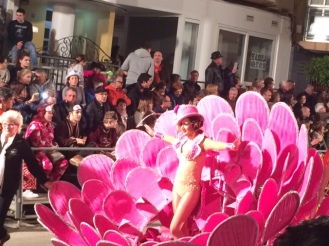 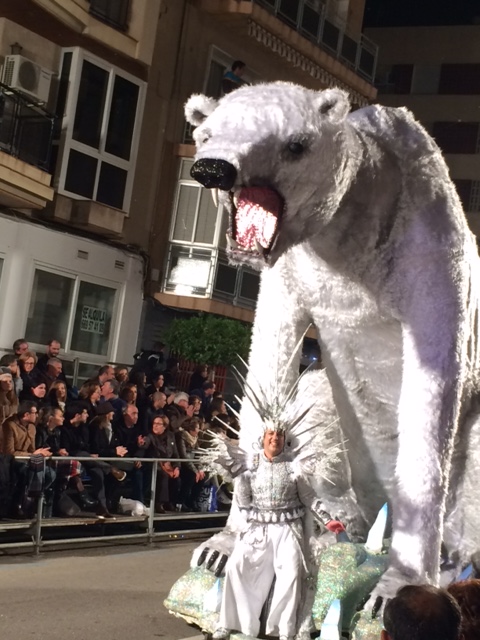 Spain really do know how to put on a show when it comes to fiesta time. Steeped in tradition it sometimes feels like there’s something to celebrate every month! Valenica regions exuberant and anarchic, Las Fallas has to be one of Europe’s wildest spring parties. It’s a time when all the towns in Valencia region are all but taken over by the fallas, which are huge sculptures, built by teams of local artists. Each neighbourhood sponsors its own falla, and when the town wakes on 16th March, dozens appear around the town. Reaching up to 5 stories high the festival culminates in each fallas being burnt in turn, this bizarre tradition continues and despite the huge statues now being constructed of toxic polystyrene, it really is a worthwhile sight! 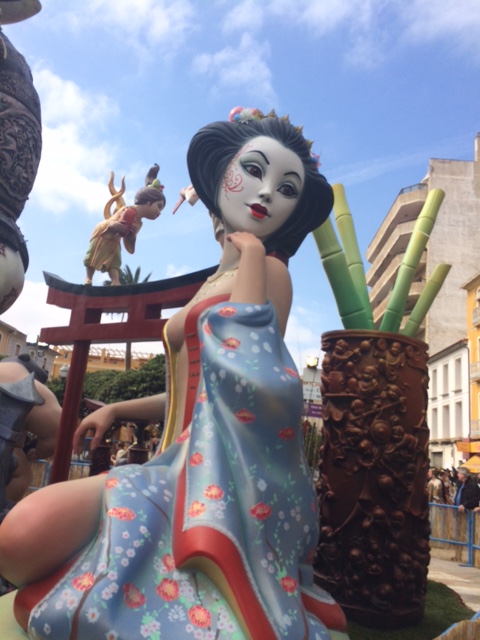 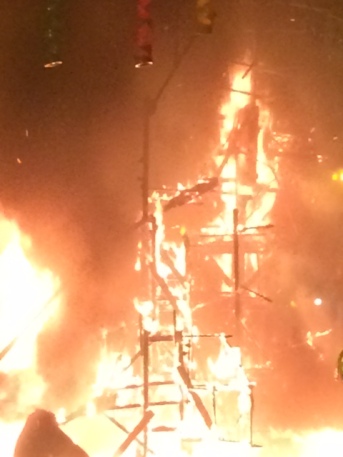 With a beautiful beach, outstanding architecture around every corner and brimming with history Barcelona is a must see Spanish city. Having visited several times before I never tire of this place. Add to that culinary delights in abundance and this really is a City of a thousand delights. 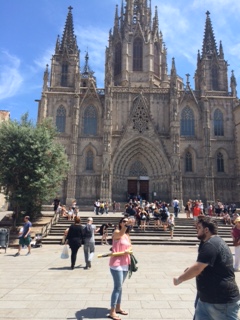 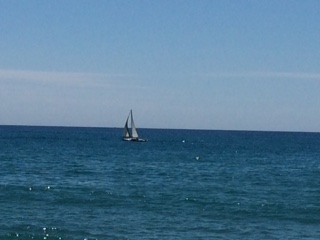 Spain has surpassed all our expectations and been full of surprises. Our motorhome has allowed us to experience not just the side of Spain that we have all seen in holiday brochures or got to know 1st hand from package tours, it’s provided us with a way of getting to see some of the real Spain & for that we are very grateful. As far as European countries go it is extremely cheap too, buying food and wine in Supermarkets, eating out or simply stopping off for a coffee, we never had to wonder if we were about to be “ripped off”. So for now we say Adios as we head across the water to Italy to continue our adventure, I’m sure it won’t be that long before we’re back again though.