One of the best things about travelling around Europe in our motorhome has been finding a more natural and healthy pattern in our daily lives. In our pre-motorhome days we were always too busy, too stressed or just too tired to contemplate much in the way of exercise, and when we did it was often crammed into a small window in our ever busy diary. Although our hectic working lives meant we were always on the go and active it was the wrong sort of exercise. We managed to have a healthy diet, but I often found myself buying ready chopped fruit and veg to ease the load. So with both time and the pleasant Mediterranean weather on our side, it’s been fantastic to be enjoying exercise again without really having to think about it. Overall we think that travelling in our motorhome has had a huge positive effect on our health and fitness. We sleep better, spend more active time outdoors and feel much more connected to nature and each other.  We haven’t felt the pressure or requirement to “force” ourselves to exercise because we’ve been so physically active doing things in the outdoors that we love to do.

Here’s our guide for keeping fit whilst on the road: 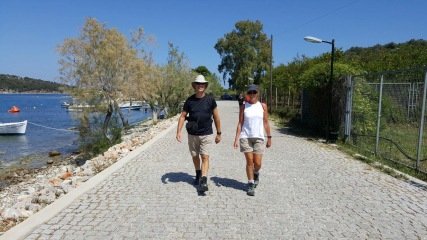 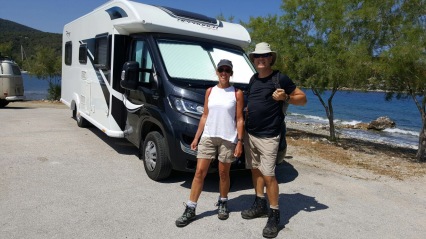 Having never been into big hikes or even long walks, we now find ourselves walking almost everywhere. With motorhome parking often out of town we regularly walk up to 10 kilometres just to pick up some fresh supplies or go for a coffee. Having invested in decent hiking boots prior to our travels we have also become more adventurous hiking up mountains, along coastal paths and even up a volcano! Shanks pony is a great way to see the local area and we often find ourselves spotting things we would have otherwise missed. 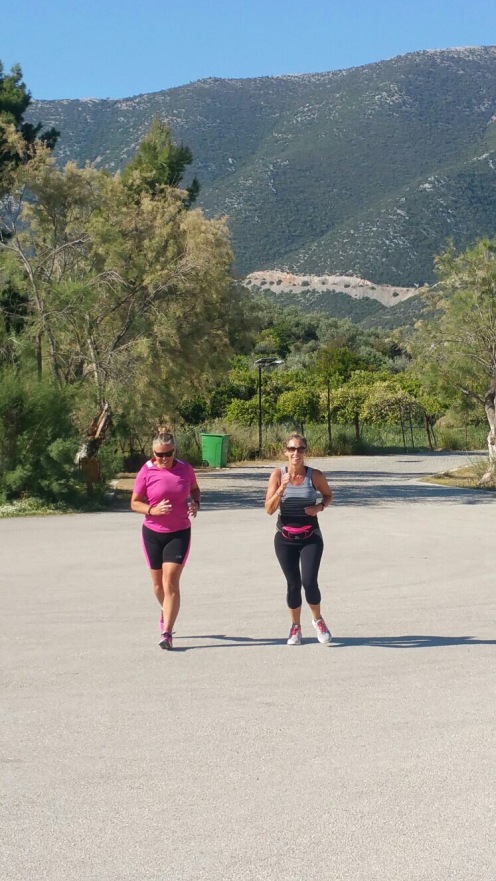 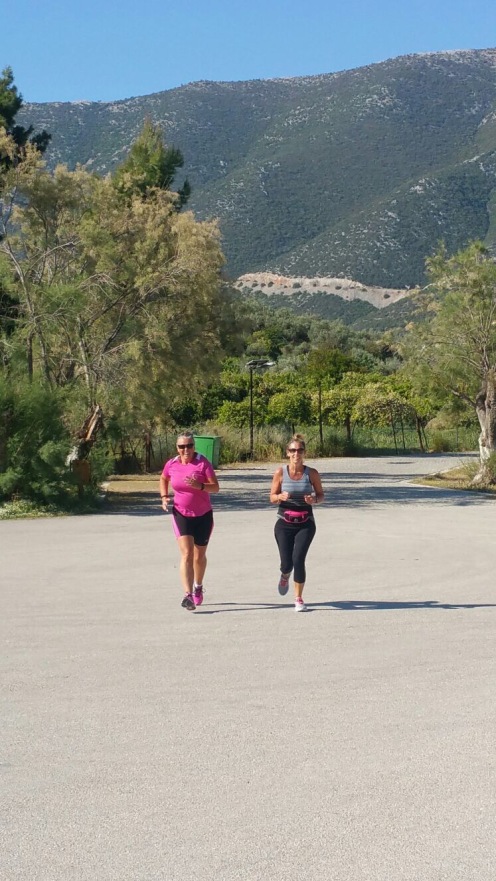 If someone had told me that I would be running 5 km’s every other day a couple of years ago I wouldn’t have believed them, but that’s exactly what I’m doing. Having not ran since my school days, and not being naturally sporty, its given me a real sense of achievement. I started with the couch to 5k app, an easy program for non-runners to literally get off the couch and be able to run 5k within 9 weeks. Having reached my goal I didn’t want it all to be in vain so I have continued to run every other day, although my morning runs are now getting earlier as the days get hotter! 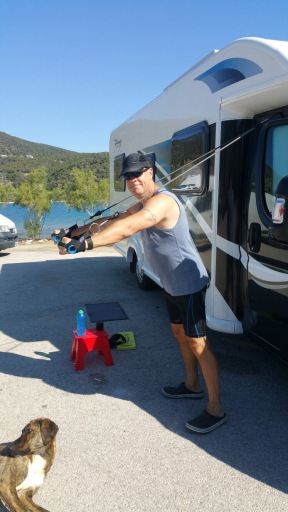 Having had a knee operation a couple of years ago Paul cannot join me on my runs so instead invested in some resistance bands from body lastics. These lightweight rubber bands allow you to complete a full work out without having to carry around heavy and cumbersome weights. They have been such a worthwhile investment as we both use them as part of our workout routine. Below is some examples of how they can be used. 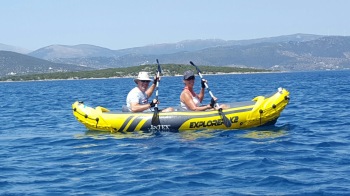 Before leaving the UK initially we briefly muted the possibility of buying an inflatable kayak, but with space at a premium we quickly dismissed the idea. However after meeting Karen and Myles and having some fun on the water in theirs we changed our minds. We managed to locate an inexpensive one of Amazon.es made by intex and arrange delivery to a campsite in Spain. The newly christened “Kev” has been a great addition to the family and has already had several outings in Greece.

Another new addition to our “box of fun” is two boogie boards which we purchased from one of the many Chinese shops when in Spain for less than 20€ for two. I actually disposed of my winter coat to make room for them, so I’m now hoping that we get more use out of them than I did my coat!! Just awaiting some reasonable rollers, so watch this space…… 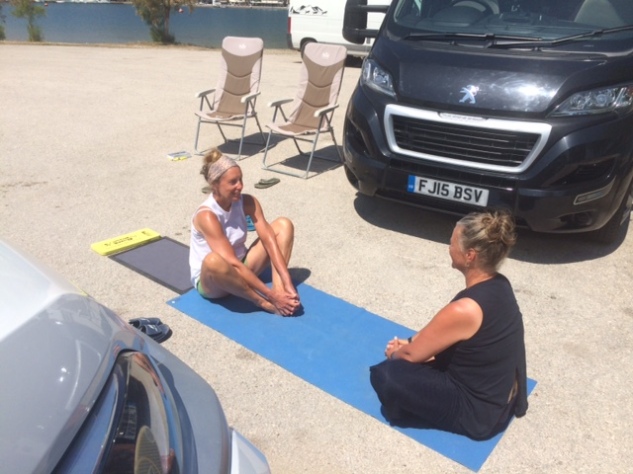 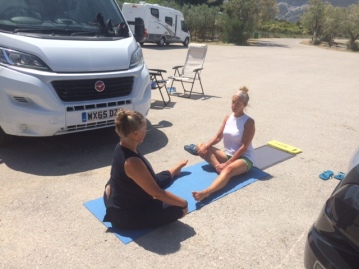 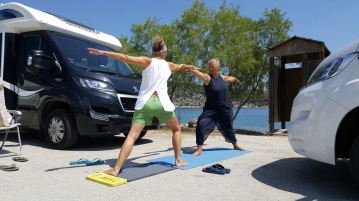 Having never tried yoga before I was recently introduced to its merits by Karen and now having  enjoyed several sessions together on the beach I feel it’s something I’d like to do more of. I’m told the continued practice of yoga will lead you to a sense of peace and well-being, and also a feeling of being at one with their environment and after just a couple of session I can understand why. 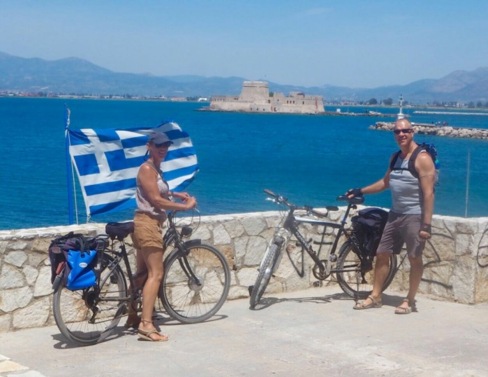 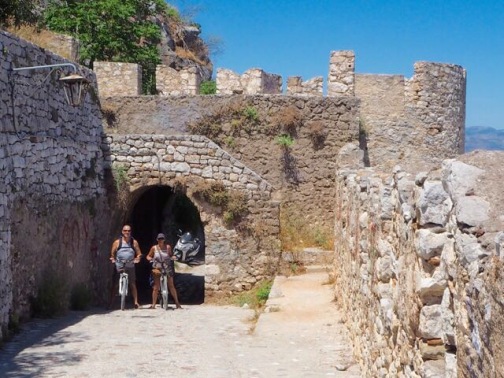 Our electric bikes have been one of our best investments for our motorhoming life, allowing us to travel much further distances in the knowledge that we always have power to help us on the way back. We recently completed a 72km round trip around Lake Trasimeno in Italy and certainly wouldn’t have managed this unaided. They are often our preferred mode of transport for shopping trips once we have parked up or used for day’s out to a pretty beach or landmark. As the functionality allows us to use them as normal bikes only using power if required, we are also keeping fit at the same time. 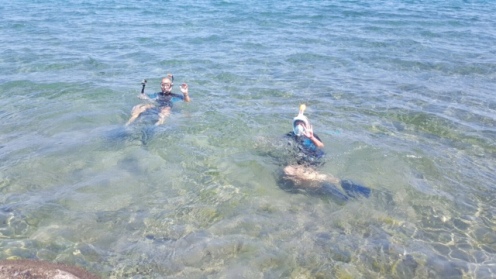 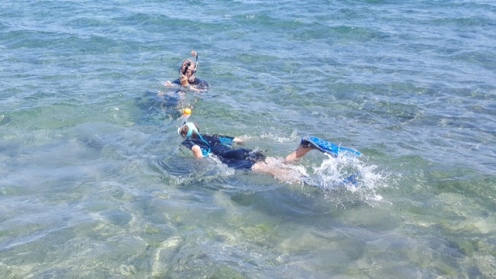 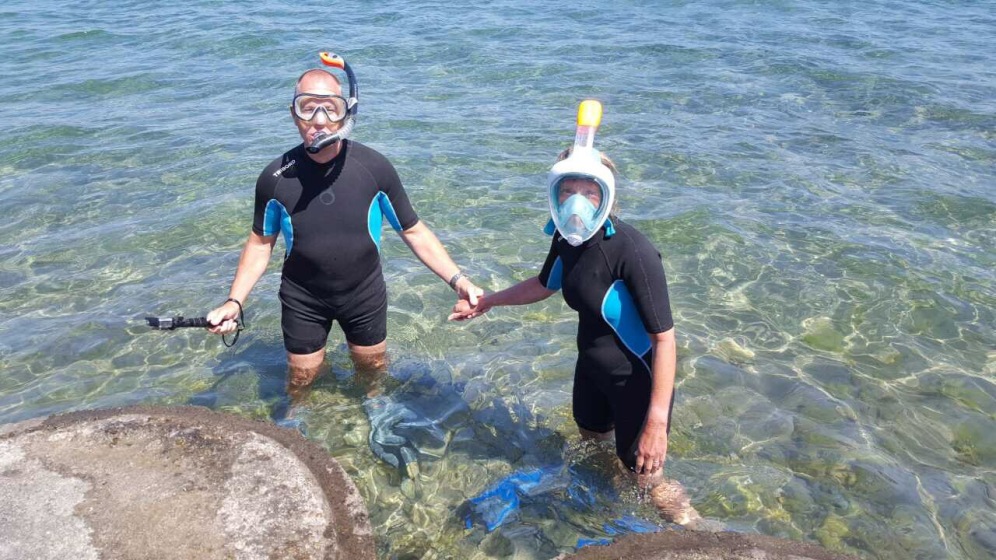 Although the sea is still a little cold for prolonged swimming we have braved it a few time snorkelling (in our wet suits). I’m totally hooked on the amazing sites under the water and this is saying something for someone who wouldn’t even put her face in the water 10 years ago!!

Although we can’t rely on finding outdoor gyms everywhere when we do find them we  take the opportunity to use the free facilities. There is just something about training outdoors that makes it seem so much less of a chore and so much more enjoyable. Although the equipment quality varies, it’s still a great way to work out for free. 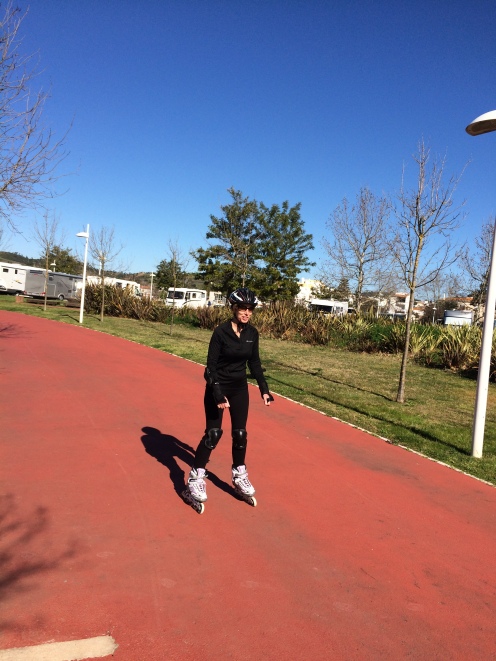 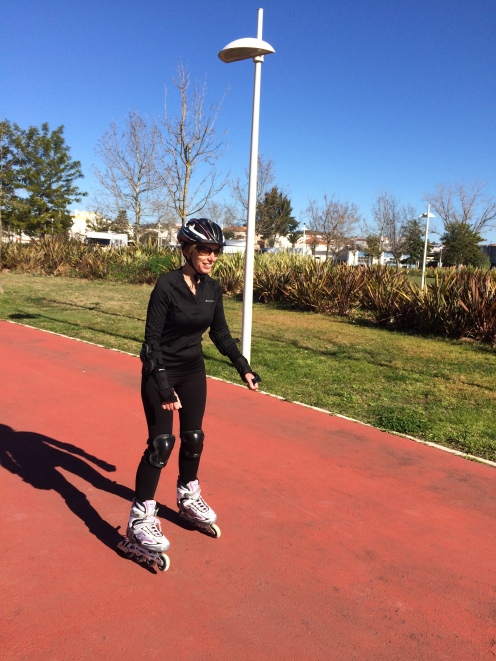 Ok these are only really useful where we are parked up near a very smooth long prom which doesn’t happen that often, but when it does I absolutely love them! I still need to master the art of stopping though!

After seeing lots of this game being played throughout our travels last year (it’s not too dissimilar to bowls), we invested in a set for our “box of fun” and have spent many hours challenging each other and others to a match.