After almost 3 months in gorgeous Greece it was with slightly heavy hearts that we made our way across the border into Bulgaria with our travelling buddies Karen and Myles (www.motoroaming.com). The process was very simple, we just had to show our passports and vehicle registration document (V5), the border officials then stepped inside Boris and had a cursory glance inside the wardrobe and bathroom and were gone again. That was it we were onto new adventures discovering for us uncharted territory.

With a quick stop off for some Bulgarian leva and a vignette for the road just after the border crossing and we were good to go. We’d chosen a campsite just 20km’s from the border Camping Kromidovo (GPS 41.45446 23.362994), an easy drive on decent roads until you reach the village which has some rather large speed bumps and pot holes so caution is needed. The English owners John and Sara have converted their land into a small eco camp site, the intimacy and facilities make this site a very welcoming first (or last) stop.

Situated near the village of Melnik  which is famous for its wine, it seems that if you visit on a weekday even in summer you virtually have the place to yourselves. Steep sandstone pyramids form a backdrop to this tiny village, these natural rock formations resemble sorcerers hats or mushrooms towering above the buildings below. Seeing the village only requires a day and can be done on foot and the many restored historic buildings and quaint cobbled streets are perfect for ambling around and soaking up the atmosphere. Of course a visit to Melnik would not be complete without a little wine sampling, rather than visit one of the area’s winery’s we opted to taste the wares at one of the village stores who kindly opened bottles of the local brew to tantalise our taste buds. We opted for a couple of large 2 litre bottles of cabernet sauvignon at only 8 Leva (equivalent to £3.50) per bottle we may soon wish we’d bought more!! 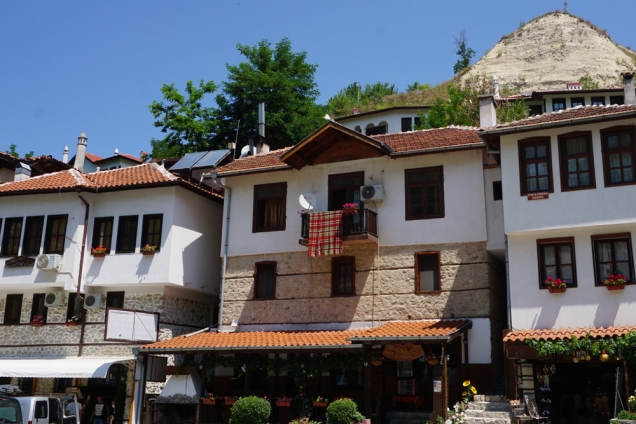 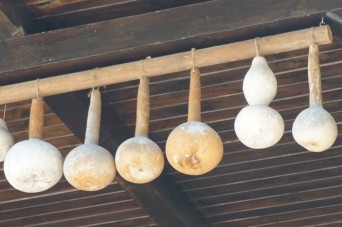 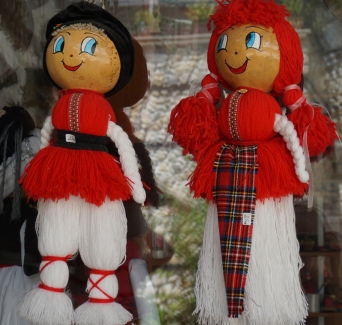 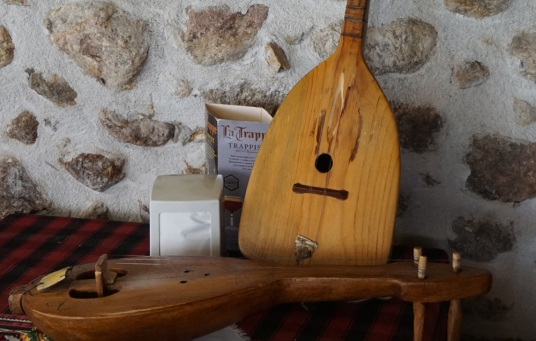 With the temperatures set to rise to the early 40’s we plotted a route into the Rhodope Mountains. Vast stretches of serene pine forests, perilously steep gorges and hundreds of remarkable caves characterise this enthralling region.  Scattered with pretty alpine villages still living a simple traditional life, apart from the ski resort of Pamporovo this region has mainly escaped the throngs of tourism allowing it to stay true to itself.  In this expanse of majestic, thickly packed forests, nearly 300 bird species have been spotted, as well as brown bears, wild goats and wolves.

We soon discovered that there were no campsites in this region so we would be forging our own path and hunting out wild camping spots. Our 1st stop was just before the Yagodinska Caves  the route to which is down a hairy narrow lane with just enough room each side for our wide vehicle. The cave is the Rhodope Mountains’ longest at 8.5km, and its many abysses and labyrinthine tunnels also make it one of Bulgaria’s deepest grottoes. The 45-minute tours leave on the hour (although ours was in Bulgarian you can arrange an English interpreter if required) and highlight curtain-like rock formations and knotty stalagmites, resembling towers of profiteroles.  The temperature inside is a chilly 6 degrees, a nice respite for us from the humid outside temperatures. Our overnight stop was in a layby alongside the river (GPS41.641928 24.33194) around 2 km’s before the caves.

We wanted to hike to the nearby Eagles Eye viewpoint a platform jutting out of the side of the mountain offering 360 degree views over the surrounding landscape, but after a precarious drive (once having to reverse back down the narrow road) up to the nearby village we were told by a local bar owner that it was better to take a 4×4 up to the 1600 metre high view point. So with no paperwork, signatures or safety briefing we climbed aboard for the most hair-raising drive of our lives. The rutted mountain track had seen better days and was well worn by the constant stream of jeeps from local tour companies that follow this route daily. With no harnesses or seat belts we clung to the metal roll bars as the 4×4 clung precariously to the cliff edge whilst mastering the art of climbing up incredibly steep gradients better suited only to mountain goats. With much screaming and with ever paling faces we made it to the top where we could breathe a sigh of relief briefly whilst we enjoyed our surroundings before the ride back down.

The Views from Eagle’s Eye 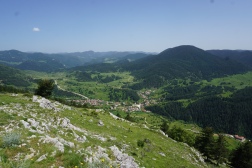 After a night to recover from our adventurous ordeal we followed one of the roads carved through canyons of sheer rock and fir forest, past tumbling rivers and stone bridges dating back to Roman times; past brown-and-white chalet houses, and trucks left over from the Communist era, towards the village of Trigrad.

About a mile before the village you come to a rock wall with a small door, above which a misleadingly homely wooden sign reads “Diavolsko Garlo”: the Devil’s Throat. Opening the door releases an icy blast for this particular portal into Hell is not fiery but freezing.

The so-called “Hall of Thunder” is a vast twilit cavern that owes its name to the 140ft waterfall from the Trigrad River pounding down outside its roof.

Its floor is a labyrinth of underground cataracts, rapids and lakes from which no would-be-explorer has ever returned alive. Teeth-chattering tourists aside, the only inhabitants are bats. Hundreds of glimmery lights somehow only intensify the spray-flecked gloom; as one descends the wet rocks and slippery wooden stairs. Britain’s health and safety zealots wouldn’t know where to begin.

We returned to the village to rest for the night just behind the square (GPS 41.594379 24.380577). The village is just beyond the stunningly beautiful Trigrad gorge with its 300ft stone walls towering above the river below. The villagers follow traditional ways and can be seen at this time of year felling trees from the nearby forest in order to season the wood in anticipation of the forthcoming winter. Our choice of restaurant for the night could be seen earlier in the day slowly spit roasting a whole lamb ready for the evening feast, a treat not to be missed! With plates laden with salad, roast lamb, homemade chips and of course a litre of local wine all for the small sum of 25 Leva for 2 including tip (around £5 p/p). 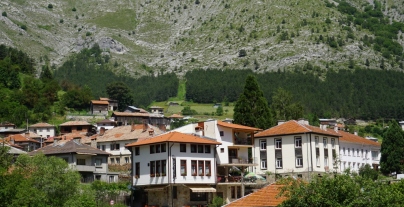 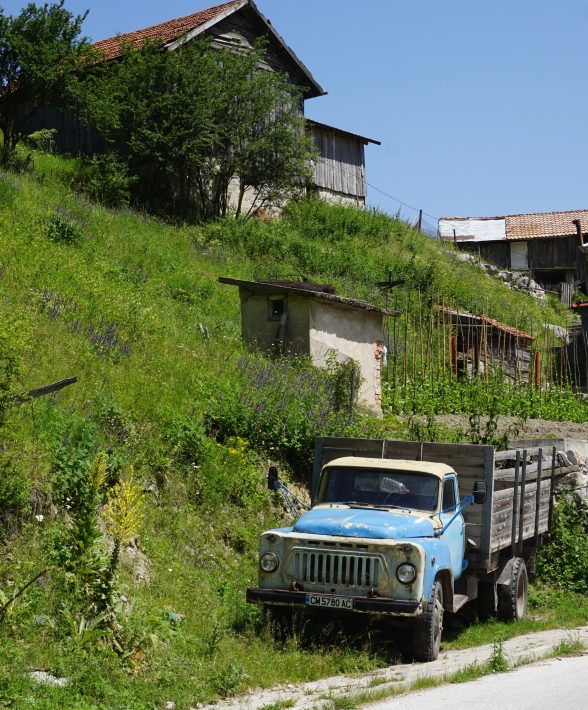 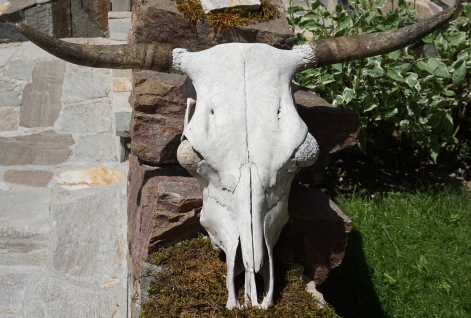 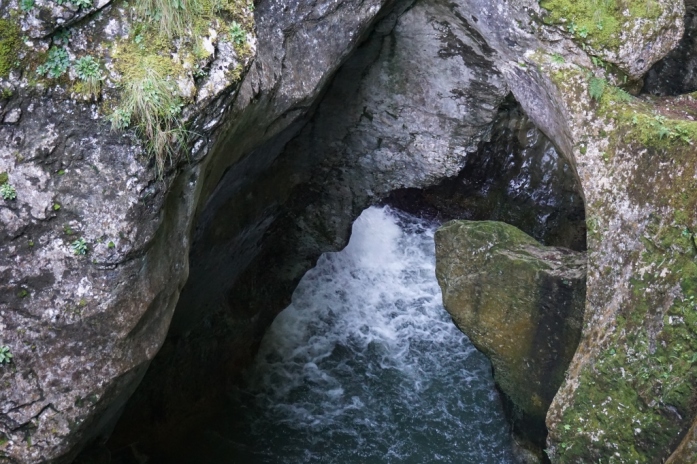 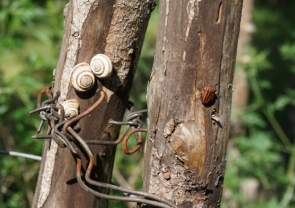 With a storm brewing we decided to head to the ski resort of Pamporovo which offered several choices of car parks away from trees where we could “batten down the hatches” for a day or so. On route we made a stop at the charming village of Shiroka Laka which has preserved its architecture, making it an attractive village for tourists to visit. The narrow winding cobbled streets are dotted with appealing dwellings interspersed with restaurants and shops selling local wares. We managed to buy some freshly picked porcini mushrooms for just a few leva at the side of the road.   At Pamporovo we chose to stay close to one of the chair lifts that operates during the summer months to take you up to the mountain top (GPS 41.641294 24.69112). The lift to the top costs 9 L return p/p around £4 and although we bought a return ticket we decided to make to relatively easy hike back down whilst the sun was still shining. This purpose built resort doesn’t quite have the charm of the surrounding villages, but the Bulgarians have done a pretty good job at making it attractive. In summer it’s deserted and more like a ghost town than a bustling resort. No doubt this all changes later in the year when herds of tourists make their way here to enjoy the 25km’s of snow covered piste. 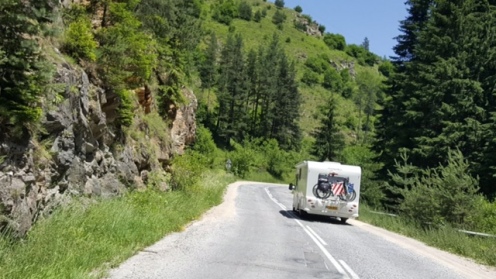 After falling in love with Greece, Bulgaria had a tough act to follow, but I’m pleased to say she’s enchanting us with her breathtaking scenery and warm friendly locals.