Our drive from Moulay Bouselham towards Volubilis took us through unexpected lush green countryside which just didn’t match our pre-formed vision of Morocco, it’s a clear indication though that northern Morocco gets its fair share of rain. Driving  in Morocco however is not without its challenges and idiosyncrasies especially in a large vehicle.

You need to be a reasonably confident and experienced driver as there are no shortage of challenges and obstacles on the roads, and it can be very stressful at times; taking a large vehicle around dozens of single-track hairpin bends or down a busy motorway where the lane markers are just a ‘guide’ really isn’t the best idea if you already struggle to drive in the UK or Europe. You have to keep your wits about you at all times as obstacles come in all shapes and sizes

Stubborn donkeys, children jumping out to try and sell herbs and rocks, hitchhikers, men literally standing in front of the vehicle trying to get you to visit their restaurant, camels, cattle or goats crossing, cyclists, massive slow moving overloaded clunking trucks on mountain passes, scooters and clapped out motorcycles winding between the traffic, young and old women carrying back-breaking loads, drivers who don’t think sticking to a single lane or giving you an inch of space or crossing a single white line is a good idea and everything else in between. That said the driving here is entertaining and gives you a taste of how real life here goes on outside of the main tourist hubs. 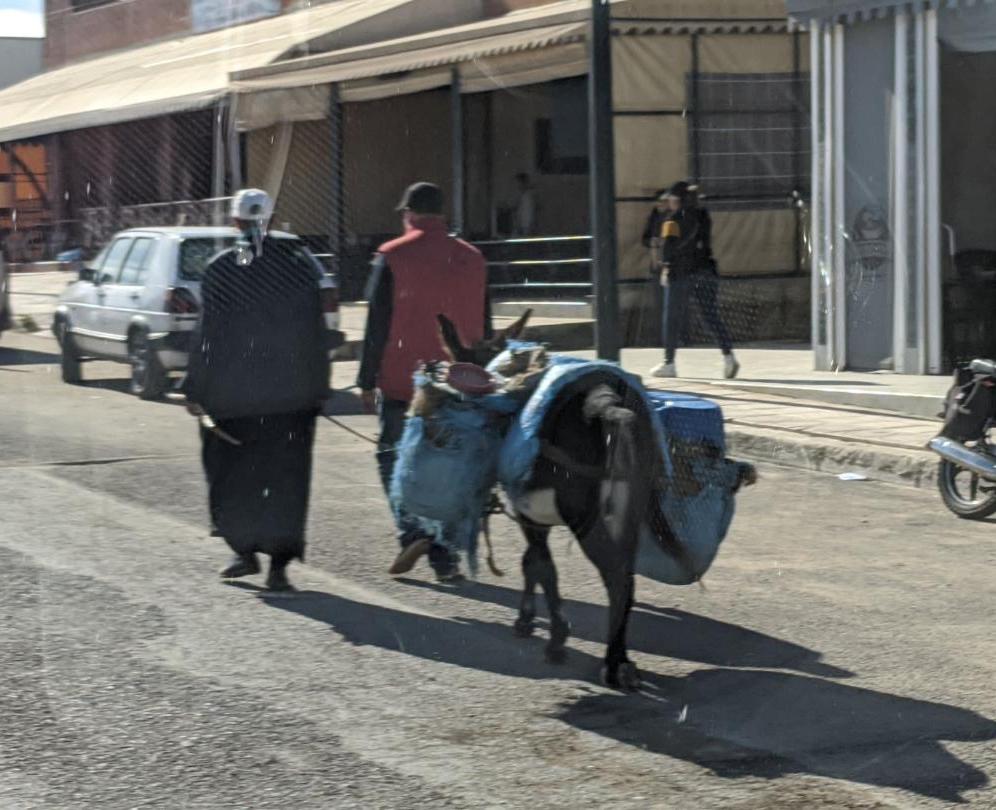 On route to the city of Meknes we stopped off for a visit to the Roman site of Volubilis. Visible from the nearby holy town of Moulay Idriss , and from higher points throughout the valley, Volubilis is one of Morocco’s best preserved Roman ruins. It’s located between the Imperial Cities of Fez and Meknes on a fertile plain surrounded by wheat fields. Established before the Christian Era, at a time when the area was part of Mauretania, Volubilis was considered the administrative centre of the kingdom of Mauretania and also one of the most remote cities within the Roman Empire, located in the far southwestern region. 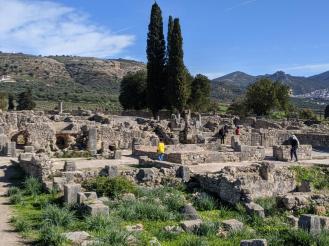 While the city continued to grow well into the second and third centuries AD when the majority of the buildings still visible were built, it is believed that the 42-hectare walled city was once home to 20,000 residents. With wealth generated from local olive production, many grand residences, complete with stunning mosaic tile work, were constructed (and still visible and intact to this day despite being open to the elements) as were public hammams, triumphal arches, and parliament buildings. 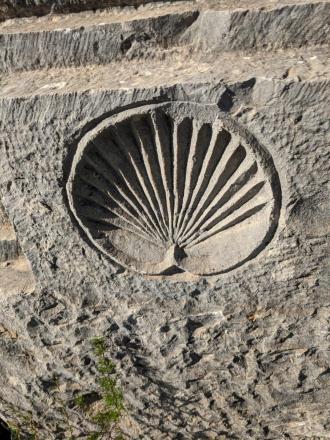 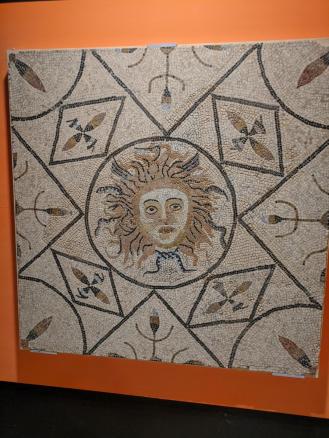 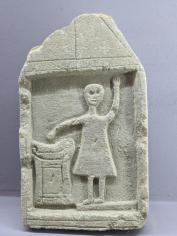 In the 18th century, the Lisbon earthquake hit the region, which caused the destruction of the buildings. As early as the 1830s, well before the French Protectorate era, the French army began excavations. In 1997, the site of Volubilis was  listed as a UNESCO world heritage site.

If required guides are available at the entrance, but we decided to wander freely and enjoy the site at a leisurely pace. A visit here is well worth the 70MAD (€7) entrance fee.

The city of Meknes is a short drive away from Volubilis and has a parking area for motorhomes right by the city walls and  is another UNESCO world heritage site. Often bypassed by visitors to this region in favour in Fez, the city is worth a visit and as it is almost void of tourists you can wander around without being hassled.

The walled city proudly displays the gate of Bab el-Mansour, completed in 1732, the gate is impressive not only for its size but its original green and white tiles,  the marble columns that proudly flank either side are reputed to have been taken from the nearby site of Volubilis .

Meknes is a great place to shop like a local and the warren of streets and alleys defined by the products they sell are a great way to immerse yourself in local life.

You’ll find everything from specialist souks selling crafts and swathes of textiles, to knock-off trainers, souvenirs and carpets.. At its heart is the twelfth-century Grand Mosque (although this is closed to non-Muslims), while teahouses in secret courtyards, ornate riads, and the odd hard-working donkey add to the atmosphere. 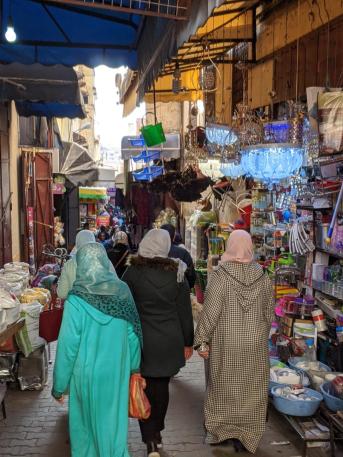 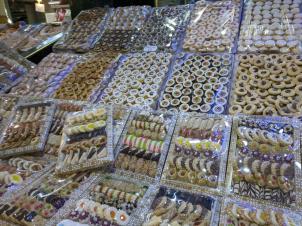 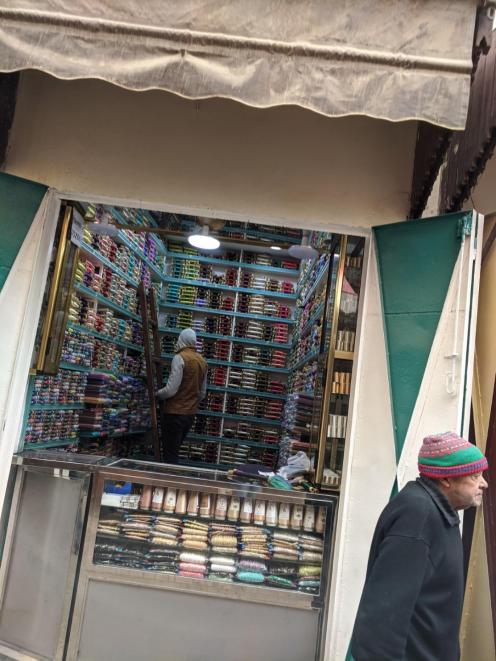 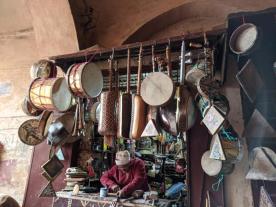 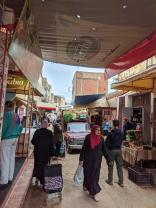 The city is centred around the main square,   reportedly nowhere near as lively and chaotic as the main square in Marrakech, Place Hedim is often said to be Meknes’s version of the famous Djemaa el Fna. It is surrounded by historic buildings and narrow alleys that lead into the  bustling markets. It is especially lively in the evening time, when you’ll find an assortment of snack vendors and stalls selling freshly squeezed juices, music, and carnival-like games and competitions, such as trying to hook a bottle on a fishing rod (it looked impossible to us). You will also see an array of animals brought there so that any visiting tourists can enjoy a photograph with them.  We saw monkeys, a snake charmer, horses and even a ostrich being paraded around. 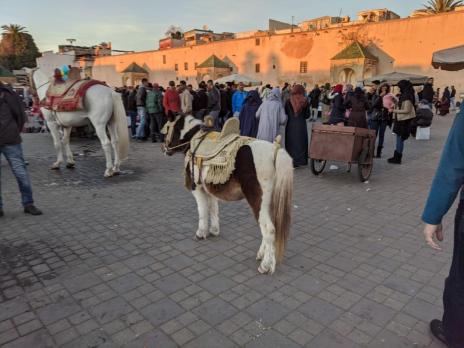 Although Meknes is not a foodie haven, it’s worth hunting out one of the restaurants where locals fill the tables. We had a delicious meal of rotisserie chicken served with chips, rice and salad for around 60 MAD (€6) each.

Morocco has so many faces, no one place is the same as the last making it a magical place to visit.

Meknes (GPS 33.890371 –5.565188). If peace and quiet is what your after then this isn’t the stop over for you. This is a guardian parking located just outside the city walls. Due to the location it is noisy and can be busy with cars as it’s a mixed parking area. That said it’s very convenient for visiting the city. Cost 50 MAD (€5).

Our Christmas in the Sahara coming soon.