Our drive from the Desert towards the base of Todra Gorge at the town Tinghir took us via the modern university town of Errachidia, so we took the opportunity to do a “big shop”. Most of the shopping particularly in remote areas is done at local stores or a local souk (market). We’d managed perfectly well with this, but being able to stock up properly at a larger supermarket does get me a little excited. There are two major supermarket chains here Marjane and Carrefour, but they are still few and far between. With our fridge and cupboards re-stocked and our tank full of fuel we continued on to our destination, camping El Mabrouk. This camping area is more of a parking within the grounds of a Berber family’s house than a traditional campsite. As well as looking over a panoramic vista of the mountains and oasis our parking also overlooked the small night time pen where the family kept their 2 camels and 2 donkeys.  A lot of families here still rely on animals for all sorts of tasks, in rural areas they still function as the family’s main form of transport and can be used to transport anything from people to crops. Although this is an alien sight to us, without the money for machinery they are a much needed part of rural life.

On arrival we were warmly greeted by Hamid who served us Berber tea whilst filling in their documentation and regaling us with stories. He offered us the opportunity to have dinner of a hot salad followed by brochettes, fresh fruit and tea for 70 MAD (€7) per person which we accepted.

Shortly afterwards hearing a commotion from outside I grabbed my camera and headed out. Abdul, Hamid’s brother had just arrived with his camels and donkeys,  and before I knew where I was he’d lifted me off my feet and thrown me on the Donkey’s back. Grabbing handfuls of brightly coloured scarves he quickly dressed me up like a human sized Berber doll. Of course his ultimate aim was for us to purchase his scarves and jewellery, a clever sales ploy. 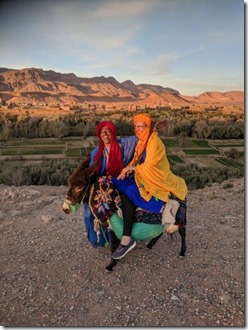 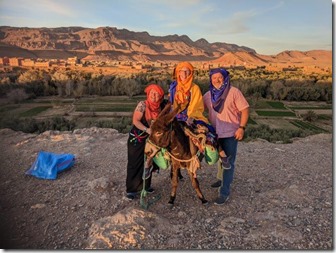 At 8pm we went off for dinner along with a sizable party of Spanish who were also now parked up alongside us, we were joined by several members of the family who were disappointed that we weren’t drinking alcohol (don’t worry we were just having a night off to give our livers a rest). Despite being a Muslim country we’ve been asked for alcohol several times by Moroccans. After sharing several glasses of the Spanish parties wine and brandy though the family gathered round for a night of music. Everyone joined in either playing an instrument or being dragged up to dance. It was great fun and a real party atmosphere.

With the offer of a free washing machine, (it’s funny how things you take for granted at home get you excited when you’re on the road), we decided to hang around for another day before driving the gorge so that we could take advantage. We spent the day cycling around the local town of Tanghir – mainly on the hunt for red wine supplies for Trevor, who hadn’t banked on supping so much until they got together with us! We also took in the old Kasbah which at this time a year becomes home to Nomads who hunker down in the ruins for winter. 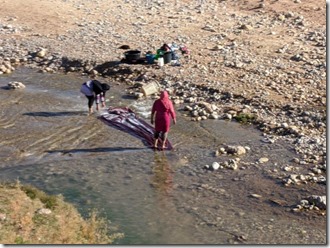 It was another picture-perfect Moroccan blue sky when we set off  the following morning on our drive up the gorge. In spring, the snow melt from the High Atlas Mountains collects and rushes downhill but until then the large gully where the water normally rages remains empty. Over the years, this southerly flow has cut deep ravines and dramatic valleys, the most dramatic of these being the Todra Gorge. At almost 200m high and only 10m wide at its narrowest point, it’s superb Moroccan scenery.  The sun had only just risen over the canyon walls and the red rock was shimmering in the early morning light

A paved road runs all the way up the gorge, making the main tourist area an easy (but somewhat blighted) destination to visit. A little lack of communication with our travelling buddies meant we carried on our drive whey past the gorge and up into the High Atlas Mountains beyond.

In addition to captivating gorge landscape, we passed goat and sheepherders on the paths, nomadic settlements high up in the hills and rural farmers making a living on the valley floor. Although at first our journey beyond Todra was a mistake it was a great opportunity to explore a genuine side of Morocco far removed from the tourist stalls at the Todra Gorge car park. Far beyond the gorge itself at the village of Agoudal, we discovered that the road that links the Todra and Dades gorges was whey beyond the capability of a standard motorhome and would still be a challenge in a small 4 x 4. Note for anyone following in our tracks the journey beyond the gorge is not really worth the 3 1/2 hours it took to complete it, so our suggestion would be to turn around in the gorge car park or park there and explore on foot.

After a long days driving we rested for a few days at the bottom of the Dades gorge at camping Soliel Bleu. With new years eve looming we remained static, enjoying an early dinner of Tandoori Chicken grilled over a charcoal fire, accompanied with chana massala and bombay potatoes. Despite having gathered some wood for a fire as we were 1600 metres above sea level the night air was bitterly cold, so we retreated inside, not quite making it until midnight to see in the new year.

We’d never heard about Dades Valley before – when we saw the pinkish, twisted rock formations, little villages with houses perfectly blending with the barren landscapes and oasis full of bright green vegetation that created a sharp contrast to the red rocks.  The Gorge is 45 km long and formed with the most dramatic red rocks formations. It was an amazing experience driving this spectacular road. We passed interesting Berber villages and stopped at some viewpoints to inhale the dramatic landscapes. The contrast between this red rock colours, the green oasis with the palm groves was immense. The most spectacular of the formations is known as the “Monkey’s Fingers”  it’s a magnificent rock formation just 9 km from Boumalne Dades. Unfortunately for us the sun was not quite high enough in the sky to get the amazing shots you see in guide books, but hey we saw it with our own eyes and it will stay in our memories for a lifetime.

One of the most photographed sections of the gorge is the snaking set of switchbacks.  The winding road  was an absolute highlight of our visit. Driving Morocco’s famous zig zag road by motorhome was quite adventurous but perfectly safe. After a set of hairpins turns, you will get rewarded with stunning views from the top. We were fortunate to drive it in tandem with Jan and Trevor so were able to film how spectacular it is for you to get a taste.

Camping El Malbrouk  GPS 31.530221 –5.546055 basic parking with EHU and toilet block including one shower (we didn’t try it as figured it was cold water only). You can use the washing machine for free. Cost of staying is 60 MAD a night (€6). The family here are all slightly bonkers, but offer great hospitality.

Camping Soleil Blue GPS31.378224 –5.981166 Small walled area next to the Auberge which has a restaurant and terrace. All facilities. Camping is 60 MAD per night with an extra 25 MAD for electric total 85 MAD €8.50. You pay an additional 15 MAD for showers here. We used our motorhome one instead.