Our main reason for stopping off in Sagres on route was to experience the Carnaval celebrations that are marked across the region the weekend before shrove Tuesday. Ideally we’d have like to see the largest one in the region (which by all accounts is some spectacle) but as we’d only heard about it the day before we settled for a much smaller regional affair in Sagres which is close to the most South Western point in mainland Europe. Other than that is quite an unremarkable town with nice beaches. Arriving around lunchtime on Saturday,we walked into town to find out more info about the Carnaval. Other than a handful or so of motorhomes the place was deserted, so after a long walk we chilled for the evening enjoying a glass of Portugese wine we’d picked up on route. Being no expert  on Portugese wine (well in fact complete novices), this had been chosen on price alone – not the cheapest which is a mere 79 cents (we are yet to be brave enough to sample this) but not the most expensive (by a long way) we opted for a bottle at 3.19 euro and found that we’d made a good choice – I can see we are going to have to carry out extensive research on this front though otherwise how will we learn!!! 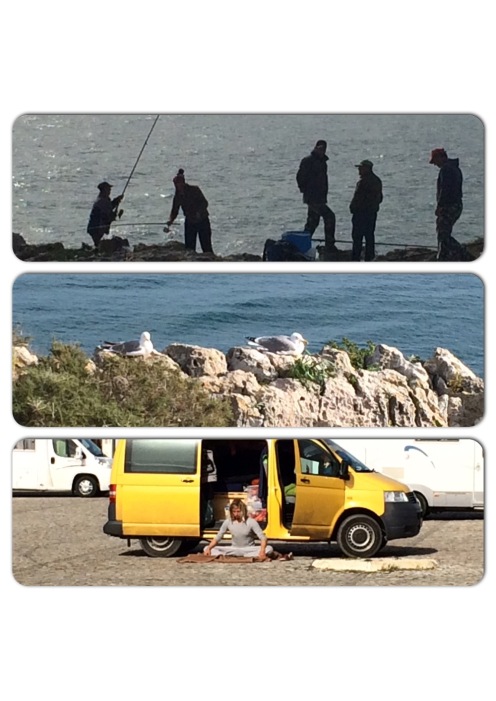 A walk around Sagres

Views from the fort

The Carnaval parade was due to about start at 3pm on Sunday (which meant it acutally started at 3.45pm) and as we took a spot in the street it more and more people appeared. Where were they all the day before when we taken a walk around a completely deserted town – maybe having a siesta – the sleepy town of yesterday was literally crowded with throngs of people.  The parade was only small with around 8 floats however it went on for hours as the same groups went up the street one way and back down it the other four times! The sun shone and a few cheeky beers were consumed (after all it was a celebration of a kind!).

Next stop Praia Da Rocha to ensure we can get a parking place for Boris before the family arrive next week! Yay.