If you have read our recent blogs you will know by now that we have been fast-tracking further north in order to meet an appointment we have on the 28th March to gets Boris’s habitation service done and a small issue that we had in the bathroom sorted out. Bailey had agreed to allow us to get this done overseas with Euro Caravan Services (one of their approved engineers) who operate a mobile service through the Spanish Costas and through France (here’s a link to their website http://eurocaravanengineer.com/). Our original plan was to get this done in June in the Vendee region of France however as we had recently had a leak in our bathroom we decided that we should take the opportunity to get this looked at sooner. Off we trotted the 8kms down the road to the campsite. When we arrived though there was a slight hitch, we found it wasn’t the right one DOH! Apparently here are two camping Marjels (fortunately for us not that far away from each other) so with Sat Nav re-programmed half an hour later we were there.

After the Easter weekend mayhem the site was calming down and more people were leaving than arriving which meant we were able to book on to the pitch right next to Clive and Helen of Euro Caravans. We got acquainted and Clive set to work on the habitation check. A damp meter gave a slightly higher than expected reading around the shower area although access was very limited without ripping the whole bathroom apart and taking a reading from the floor below and so it was muted that the only way to be sure was for us to go back to the UK and book the MH in with the dealer to do just that!  Eh, What , No way, not possible came our response! Clive took a look and confirmed that as it was no longer leaking he could re-seal it again with a special compound and it would certainly hold at that but that we needed to get in touch with Bailey HQ to check that they would agree to us continuing our journey for now and getting another damp reading done in 6 months. As today is a bank holiday in the UK we are going to have to wait until morning before calling ………. A tense night ahead!!!

The campsite is the best we have been on so far with good on site facilities of pools, a spa and cafes and large pitches each with individual water connection and grey waste disposal. The shower blocks were large, spotlessly clean and with endless hot water which we took full advantage of. Before doing that though Boris was needing a shower as the windy conditions over the weekend meant that he was looking rather sandy coloured, so with Clive’s ladder to hand we set to work with our now well-rehearsed routine (well we’ve done it once before!!!) of me on the roof and Paul on the sides. A couple of hours later and our work was done and Boris was back to having a gleaming body reflecting the suns rays from every angle. Our work wasn’t over though, with laundry piling up we took full advantage of the on-site facilities and washed and dried everything in sight. Tow huge loads later our clothes, Boris and eventually us were all like new!

The following day we awoke with nervous anticipation of our phone call back to Bailey – after all the planning and excitement that’s gone into this trip we really would be gutted if we had to about turn and head back before time. So with much apprehension Paul made a phone call as I waited nervously in the background with as many fingers crossed as possible.  Clive was still on hand if we needed him to talk through his remedial action, but it wasn’t necessary as the damp reading was considered reasonably low they have agreed for us to check it again in 6 months and provided there’s no increase we are good to get it looked at on our return. To say there was a loud PHEW exhaled would be an understatement. Feeling very appreciative right now.

The weather this week is officially scorchio – dare I even say that it’s a little too hot (especially to sit in – after all we don’t want to return looking like one of my old leather handbags). Instead we took full advantage of the fact that we were on site and whilst Paul re-organised our outside storage I took all the carpets out and gave them a good brush off and swept all the floors. Late afternoon we went to the on-site spa and gym which Helen had given us a free pass for and so after a good workout in the gym we lazed in the sauna, steam room and hydro therapy pools. It felt like we were on holiday!!!.

We didn’t bother with bringing a TV on our trip as figured we wouldn’t use it that much (it was the right decision as we’ve only watched 2 films so far from our hard drive), but tonight England were playing against Holland in a friendly and so we walked to the bar thinking that as a high percentage of guests on the site were English there was a good chance it would be on. We were wrong but Paul had a “plan b” we set up the net book and speakers on a table in a corner of the room and watched it on line via wifi – we did have to compete with the local pub singer doing his turn but we held the speakers up to our ears like oversized mobile phones and managed to hear most of what was going on. The result wasn’t I our favour though so the less said the better.

As the couple of days we had spent on site had been pretty busy ones we decided to stay another night and have a chill out day the following day. You know breakfast and lunch alfresco etc etc – well that was the plan but it was so damn hot we retreated inside Boris and opened all vents and doors to cool him down.

That’s not a motorhome its a bus together with gazebo, garden furniture and 2 prancing horses. I guess they’re here for a while!!! 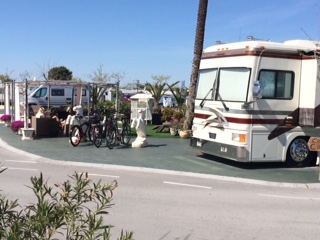 Where next then – well we’ve decide to tootle back south again to see some of the sights we missed on route. Not sure where yet, but watch this space.

Hope the weather is finally changing back in the UK now that the clocks have changed. Hopefully spring is just around the corner.