Collecting Boris from the garage was like starting our trip all over again, Brimming with excitement we couldn’t wait to get going. After a quick whizz around Lidl’s to stock up on provisions (after all we’d had to empty the fridge and throw everything away), after filling up with fuel, gas and water we were ready to hit the road. We knew we wanted to head away from the Costa Del Sol to somewhere more peaceful. Our plans beforehand had been to head up to El Chorro, Ronda and El Torque, but having sat waiting for Boris’ new key for nearly a month we now had to start making tracks north as Paul’s daughter Holly and granddaughter Aleyah are visiting early next month and we’ve planned to meet them north of Barcelona.

We knew Dave and Anne Marie (the friends who’d helped us out in our hour of need) were near Aguillas at Playa De Carolina so we decided to do a 4 hour drive and surprise them as we had yet to let them know we were back in action. We arrived there early evening and as they were sat outside the nearby Chiringuito they spotted us driving in. After a quick drink we headed back to where we’d parked up for dinner and a good old catch up. The setting was just perfect and if we hadn’t had smiles on our faces already it would have certainly put one there. Overlooking a small beach the only sound was that of the sea. After a traumatic week it was just what we needed!

The weather had changed for the better and the 3 days we spent here were hot and without a cloud in the sky, so our days were spent on the beach. The bay was perfect for snorkelling so we took the opportunity to use our wetsuits and brave the cold sea. Our evenings were spent chatting and practising our shooting skills with Paul’s newly acquired BB gun. 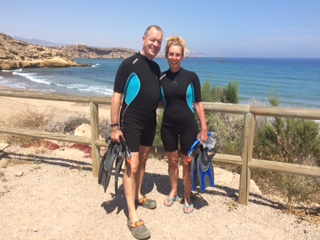 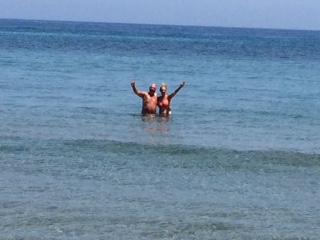 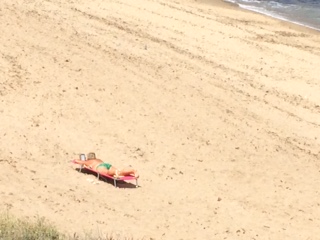 As Dave and Anne Marie only had a couple of days left in Spain before heading off back home we decided to head 100 km’s further north to Cabo De Palos near La Manga (a place Paul and I had visited before but the others hadn’t). The snorkelling had looked like it may be good there, but the weather wasn’t so kind last time we were there so we hadn’t been able to take a look. On Friday morning whilst we headed off the supermarket, Dave and Anne Marie went via Decathlon for snorkelling gear for Dave then we met later at Cabo. The weather once again was very hot (with a real feel of 28 degrees) so after lunch we headed straight for the beach and into the water.

We planned to head out for a meal that night and walked into the village and chose the Mirimar a large restaurant overlooking the harbour. Unfortunately though we didn’t choose well and our meal of razor clams and squid consisted of 6 pieces of each between two and no accompaniments! Not what I’d call a main meal! We decided to fill up on desert but after finding a foreign object in Paul’s desert and pointing it out to a not too interested waiter we have now struck this off our list for any future visits.

A night on the town

After a pretty late night we were awoken in the early hours by very loud music and revving car engines. Another party in a car park for the locals so the next morning after another snorkel we decided to head down the road to La Manga for a more peaceful night’s sleep.

Parking at the end of a dead end road right by the beach we were able to get the BBQ out for the 1st time and the four of us sat outside and enjoyed a lovely relaxed meal, music and banter. As the others were heading off early in the morning we said our good nights around 10pm and headed off to bed. 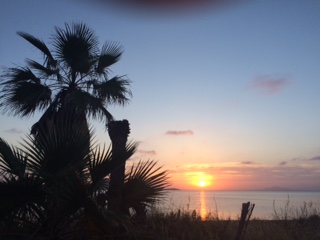 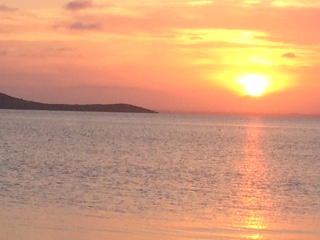 When Paul and I got up the next day Dave and Anne Marie had already left having awoken early they headed off at 5am to make good time for the long journey that lay ahead (Paul and I were somewhat later waking up around 9am so it’s a good job they didn’t wait for us to wake before going)!

We too are heading further north today – not sure where yet but we thought we’d get a few more miles under our belt.

P.S. The saga of the key is not yet over as we were only send 1 replacement key which is not even a master key we are now trying to sort out getting a full set. It looks like we will have to go to a Peugeot dealer near Barcelona as they need to be ordered in person. Hopefully it will be painless!!!