After a few days in the metropolis of Barcelona and with no sign of our new master key at the Peugeot dealer there we decided rather than wait in one place like last time (we really had no choice then as we had no wheels) we would head further up the coast to Calella on the Costa Brava.

Now the Costa Brava conjures up all sorts of images and memories for me. Firstly my first ever family holiday abroad was to Calella as a 16 year old, returning a year later for my 1st ever holiday overseas with a friend instead of parents. As you can probably imagine after 30 + years my memories are somewhat hazy and I’m not sure that on the 2nd trip in particular I saw much beyond our favourite bar of the holiday “The Rovers Return” and the roof top pool of our B & B. I do remember living on chips and booze though and having to scrub clean our favourite white canvas boots (that my friend Ali and I both favoured as our chosen fashion) after they looked like we’d played a game of rugby on a muddy field rather than just danced the night away in some smoky back street bar. With a similar experience in Lloret De Mar just up the coast a year after the image I still had some 30 years on were of typical “kiss me quick” resorts with lots of tacky tourist shops selling the obligatory Spanish donkeys and castanets and loud smoky music bars packed full of boozed up tourists (me being one of them). I have to admit I was intrigued to see whether the resorts had changed beyond recognition and how they had stood the test of time.

With some friends that we had met earlier on our trip (Julia and Ian) having had a recent scary incident in Blanes just up the coast with their motorhome being broken into in a car park we were opting for the safety of campsites for the foreseeable future. Calella has a ACSI site located a couple of kms from the town called Roca Grossa (N41 3623 E2 3819). The site is set on a very steep hill  and when showing us to our pitch the guy actually told us that the swimming pool was at the top of the mountain, so this goes some way to explaining that the hill was quite a workout. There was an option of taking a little train up and down, but we figured we could eat and drink more if we took the punishment of walking instead. Laid out on terraces the site has a view down to a little cove, and good facilities. I have to admit we never made it right to the top to see the pool so can’t really comment on that! After getting sorted we headed into town on foot, passing several coves on route that seemed to be favoured by naturists. The town itself is mainly set around small narrow streets containing numerous bars and restaurants but although I remembered the train line running right next to the prom and the vast beach beyond that I was pretty lost. Although it contains the statutory McDonalds and Burger King the resort seems to have upped its game from the days of  cheese and now seems far less tacky than its days of old. Being the first area to be developed for tourism in Spain the Costa Brava seemed to earn itself a bit of a reputation in years gone by, but I’m pleased to say that I’m looking forward to seeing more of the coast because although very developed Calella still has a certain charm. 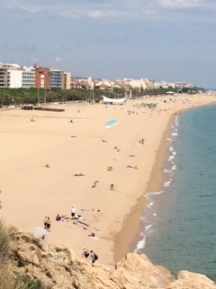 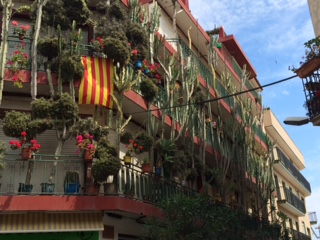 With the weather on our side the following day we walked down the hill to the cove at the bottom which fortunately when we got there seemed to be preferred by people who keep their costumes on. The bay was perfect for snorkelling and with my newly acquired full snorkel facial mask from Decathlon we headed straight into the water. The sea if a little chilly was calm and full of fish so we spent the morning back and forth to the water and trying not to fry in the blazing sun in between. After our lunch time picnic we braved the walk back up the hill to camp and sat inside for the rest of the afternoon until the sun had cooled sufficiently for us to dine out and BBQ in the evening.

After another phone call to the Peugeot dealer in Barcelona who confirmed that our key had still not arrived we decided to up and off tomorrow heading for Lloret where Pauls daughter and granddaughter will be arriving late on Thursday night.

See you in Lloret