We have really surprised ourselves recently

Our experience of campsites generally had not been good – always a little too cheesy for our liking and regimented, but we have actually found one we like over Christmas and would actually go there again!!!

Saying that though we were ready for pastures new and still without our undelivered (now considered lost ACSI book) we headed off on 2nd Jan. Having not fancied the rather long and steep hill up to Vejer de la Frontera on our bikes we decided to make it our first stop when leaving the site. The town is a typical white washed  Spanish hill town with lots of quaint narrow streets and views to die for. We spent a lovely few hours wandering around the hippy street market and walls.

Enjoying the charms of Vejer 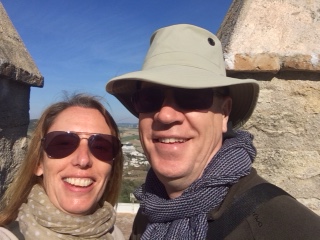 Our stop for the night was just an hour down the coast at Zahara De Los Atunes (GPS 36.132789  -5.843916) a large parking area by a dunes and a vast beach. We were lucky to experience an awesome sunset from the comfort of our van! Not bad for free!

The Beach and Sunset at Zahara 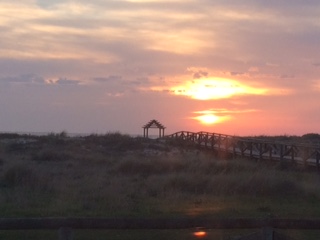 As it was yet another holiday in Spain on 6th Jan, we wanted to get to Gibraltar to try and sort out a new laptop battery so headed off just down the coast to Tarifa the following day. A wind and kite and surfers paradise this part of the Atlantic coast is still up and coming and for the 1st time in a while we actually saw building work going on around the place.  Parking at another free spot right by Tarifa beach (GPS 36.024257 -5.617137) we walked the length of the promenade (around 2.6km) into the old town, where we found a typically Spanish tapas bar. Not really knowing what we were ordering we did a lot of pointing and ended up with Crab balls, mushroom croquettes, olives, bread, shrimp pancake and meat skewers, all washed down with a couple of beers for the grand sum of 14 euros! The place has a great vibe and is bustling even in early January.After walking off our lunch mooching around the old town and castle we headed back to Boris, amazed by the nerves of steel of all the surfers braving the vicious Atlantic waves. Back at Boris we caught yet another stunning sunset! Wowzers! 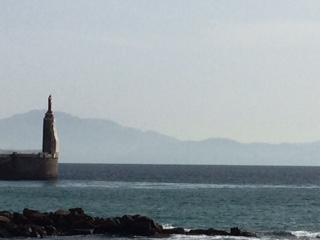 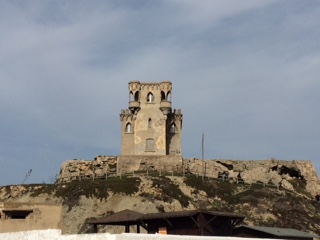 Just one night here and we were off to Gibralter. We opted to stay on La Linea and go across on bikes to avoid to long queues to get through customs. This time though we stayed by the football stadium which is just a basic parking area but as we’d visited services on route we didn’t need anything more (GPS36.158268 -5.339088 – cost 3 euros per night). We parked between a Spanish van and German one, but quickly found out our neighbours (Dave and Paula) in the Spanish van were in fact Brits who had moved out to Spain two years ago. After briefly getting acquainted we headed off on our bikes over to Gib taking the laptop with us, unfortunately though the order time for a new battery was two weeks so we are still without and probably have to go with plan B which is to get one bought over when someone next visits. Like a little Britain Gib is a good place to stock up on British brands and cheap spirits (and cigarettes if you’re a smoker) so with the temperatures in the late teens we spent a lovely day ambling around the shops and enjoying a beer in the sunshine. 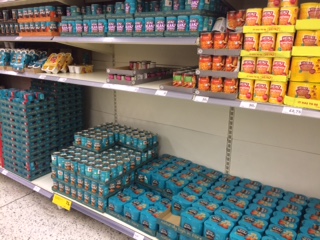 After a homemade curry in the evening we invited Dave and Paula over and had a great evening chatting and getting to know each other. Their story is not too dissimilar to ours, they are both early retirees, having ran their own business for years together. They have now though made a permanent move to Spain and have purchased a house up in the hills above Alicante.

Another trip was made on to Gib the following day  to visit Morrisons (just because we can), having shopped on route here due to the impending bank holiday our fridge was now fit to burst and along with the bacon and steak we did now have a litre of Bombay Sapphire gin for just £10! That’s gotta be a worthwhile investment!

With Spain getting geared up for another bank holiday – the three kings day in Spain is a much bigger celebration than Christmas as it’s when all the children receive their presents (following in the tradition that the 3 wise men bought gifts on this day for the baby Jesus). The evening before there are street parades with floats and bands where the children are showered with sweets. As we were staying in La Linea which is on the Spanish mainland (along with Dave and Paula) we went to join in to see what it was all about. In true Spanish style whole families were out in the streets for the event and the place was heaving with people making for a wonderfully celebratory atmosphere. It felt like Christmas all over again!

Joining in the 3 kings celebrations with our neighbours Dave & Paula 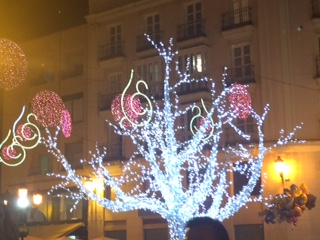 With a trip up into the white washed villages around Ronda planned the next day we were planning to move again, but not before swapping contact details and hopefully planning a future visit to Dave and Paula’s casa when we are nearby.

P.S. our blogs may not be that regular until we got the laptop sorted, so apologies in advance!