On leaving Olvera we took the road down past Ronda back towards the coast, other than spending the majority of the journey behind a lorry, it was uneventful and we reached the coast in just under 3 hours. Our  1st task was to go in search of gas to re-fill our tanks, having noted a couple of places in the direction of Marbella we made our way to the first one only to find that it had changed to a Galp station and no longer sold autogas. A quick re-programming of the sat nav and we were back on the road in search of another. Spotting a Lidl on route, we did a quick U turn and I did a trolley dash around it to re-stock for the next few days whilst Paul sat it out in Boris, having heard of motorhomes being broken into in supermarket car parks by opportunists, I now normally dash in whilst Paul stays put (maybe he’s just being cute and getting out of doing the shopping!). We may have to have a re-think on our choice of supermarket though as they appear to have stopped doing fresh fish in Lidl (we are hoping it’s just because they have filled the shelves with alternatives for the Christmas period).

Our original intention had been to go to Estapona for the night, but with the detour to the 2nd filling station we had a change of plan and opted for a lovely little beach side spot at Marbessa. Parking right in front of the beach overlooking the sea is always preferable to us (especially when it’s free)!

Arriving about 2pm we were ready for lunch and as there was a restaurant (Sinbads) next to us we decided to have lunch out. With the weather set to get to a beautifully warm 19 degrees, it couldn’t have been more perfect. We shared grilled squid and sardines (which are cooked on an open fire), so got our fish fix!

With full bellies we spent the afternoon sitting outside reading and making the most of the late afternoon sunshine. What a bonus to be wearing shorts in January! The nice weather sparked an idea that it would be nice if my Mum was able to come out and join us for my birthday in a couple of weeks. After some quick research into flights and accommodation further down the coast in Benalmadena I made a call home to see if she was up for it. She didn’t take much persuading and after a quick chat with my aunt it was all sorted. Yay with them set to arrive on 21st Jan we will hang around the coast until then and stay for a week in Benalmadena. With the following day’s weather equalling the previous ones after morning exercises followed by a beach walk we were able to sit down and enjoy the afternoon sunshine guilt free.

After a few days without services though we needed to get somewhere to empty and fill, so had chosen a campsite a few kilometres along the coast. This also gave us an address to get another charger unit sent to (this one was due to be pre tested before it reached us). We were more than ready to move though as although it’s a beautiful spot we like somewhere that’s not quite as remote (after two days of not doing much we were both chomping at the bit). A quick pit stop at the mercadona supermarket on route we arrived at Camping Burganvilla (GPS36.502641 -4.804247) around 10am. After collecting the new charger unit we went straight to do our chores of emptying and filling, at the same time taking the opportunity to give Boris a good clean both inside and out. With Boris gleaming we found a pitch and set ourselves up for our stay. With the weather still a warm 17 degrees we caught up on laundry and made the most of the facilities by taking long hot showers. We also made the most of the warm weather and the fact that we could set up camp and got the BBQ out – a gorgeous dinner of grilled lamb chops and potatoes followed.  As we are not on sites too regularly we took full advantage again the next day and tried our 1st cooked breakfast on our recently purchased Cadac grill (with the last of our English bacon purchased in Gibraltar now having been devoured it will be a while before we do that again).

Paul  got on with fitting the new charger unit which unfortunately still did not solve our electric issues, there’s  a conflict with the solar if plugged into EHU, with no idea what the problem is though we will have to wait until we return home for further investigations. In the meantime when plugged into the mains on site we just have to switch the solar charger off. At least if we do this we can still make the most of being plugged into the mains and re-charge all our electrical devices. We also took advantage and used the laptop to watch one of our films in the evening.

After a 2 day catch up and with Boris and us all clean and shiny we were making tracks again and drove along the coast to Fuengirolla (GPS36.522995 -4.629675) parking alongside the castle for only 1 Euro a day. Our last stopover here was when our keys were stolen last April (hopefully this time will be less eventful)! With the sun shining and the temperatures set to be mid teens again we opted for a long walk along the front stopping for lunch on route.

Being keen to keep fit on this trip I did a morning run and Paul walked several times up and down the steep hill to the castle followed by us both doing a workout using our resistance bands which have proved to be a great purchase. Lightweight and versatile they offer us the opportunity of a variety of exercises all using resistance. Having started the morning in the right way we then caught the bus up to Mijas Pueblo a white washed village typical of the area which looks down on the surrounding coast. Although full of tourists during the summer season at this time of year it was quiet but still a must see if in the area.  The sun was shining but it was blowing a gale and so much colder on the exposed balcon of the village. After a quick photo shoot we opted for the safe haven of the narrow village streets which as at least they offered some shelter from the gusts. After a picnic in one of the squares we stopped off for a coffee and shared a congac to warm us up!  A walk back from the bus station via the shopping centre meant we’d done over 14km’s today so we should at least sleep well. 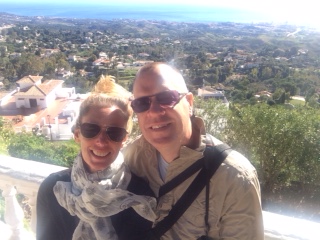 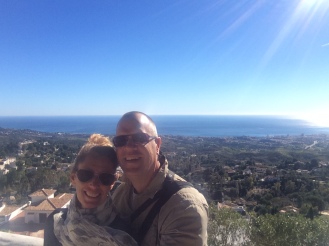 With the weather set to turn colder the following morning we set off back down the coast to la Cala de Mijas(GPS 36.504244 -4.68396) a huge car park which houses the local market but also offers free parking area with services. The weather was only due to get to 6 degrees today with a real feel of 3, quite a shock for us, but a good reminder of what we are missing at home! After going to the police station to register our vehicle for the 48 hours max stay we had a quick whizz around the market and local Aldi before hunkering down in Boris for the afternoon to avoid the cold and heavy rain which followed. We’d had a lucky escape though as other areas of Spain had experienced snow, with Ronda where we were only last week being cut off! Although we could see snow on the surrounding hills at ground level it was just very cold rain. Fortunately it’s not due to last though and should be back to beautiful sunshine by the time my Mum arrives of Friday.  The following morning after filling our tanks and cupboards we headed up the coast to Benalmadena in anticipation of my Mum’s arrival the following day. When we were there last year we were able to park near the beach at one end of the resort, but since then the area has had barriers installed so after stopping on route to catch up on laundry we joined several others parked at Paloma park (GPS 36.494765 -4.532585). 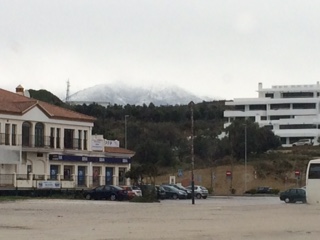 Until next time Andi & Paul

PS Sorry for the delay in updating our posts, we have been without a laptop battery for some time!