Being as Coimbra is described as a city with the oldest University and lots of winding old alleyways (which as we later found out are very easy to get lost in) and of course churches in abundance (Oh Joy!!!!) we thought it would be worth a visit. The overnight parking is alongside the river and only a 15 min stroll to the city centre. Arriving late morning we decided to wait until later in the day to go exploring as it was raining cats and dogs so didn’t venture out until around 3pm once it had slowed down somewhat. A quick reccie, a map from the tourist office and a coffee to decide where to go and go the next day. We also had our 1st visit to the Pharmacy as I had been suffering from headaches for a few days caused by sinus fortunately the English speaking pharmacist was able to give me some spray to hopefully sort it out. Day 2 in Coimbra saw much brighter skies and so we were up and out early to make the most of it – it turns out the map from the tourist office was about as useful as toilet paper in heavy rain and although we eventually found the Old cathedral, new cathedral, university etc it wasn’t without several detours and a very, very, very long walk back to our parking spot – accompanied by some moaning from me – after all I wasn’t the one reading the map (however I am 1st to admits that we’d have still been there 3 days later if I had of been!!!). Even with our several detours we were back at Boris for mid-morning (I said we had an early start) so sorted out emptying and refilling duties before heading off to our next stop at Tomar.

Another overnight stopover in a car park for us tonight (no services at this one though so we have filled and emptied beforehand), the location is perfect though just a 2 minute walk into town. It’s not always possible to park in such convenient spots with a 25 foot vehicle and maybe at a different time of year it would not have been possible but as with most places we almost had it to ourselves. As the sun was shining after lunch we headed up to the Covento Do Cristo which sits above the town and offers some great views. Founded in 1160 as the headquarters of the Templar knights is preservation is remarkable. It’s still hard to imagine all the history this place holds – if only walls could talk!

The Convento Do Cristo Tomar 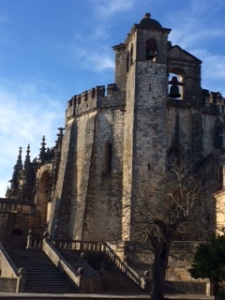 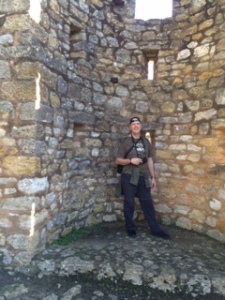 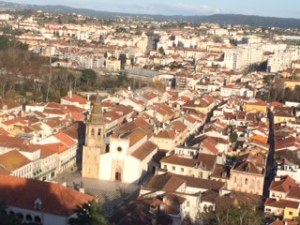 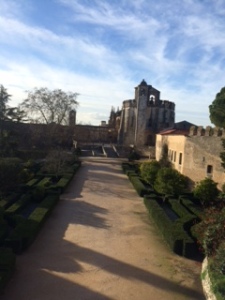 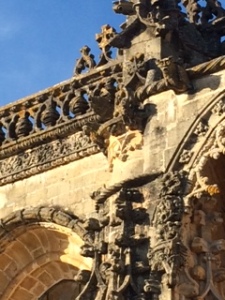 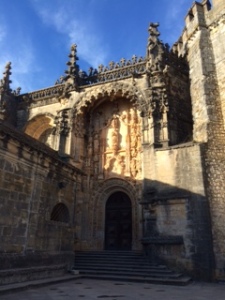 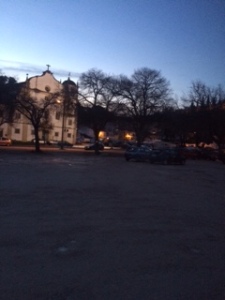 The following morning we awoke to low clouds and mist (my big winter coat got an outing)so were glad that we’d taken the opportunity to visit the convent the previous day as defiantly would not have seen it at its best otherwise. There was also a huge circus setting up in our car park – time to move on. Although we are taking time to plan where to go ahead of time inevitably our plans change (very frequently), having read about a huge dam at lake Castelo De Bode (not mentioned at all in our guide book but I remembered seeing it on a place in the sun!!!) the largest lake in the country at 60kms. Worth a visit in summer season when you can take advantage of all the lake activities without a winter coat on!! The plan was to drive on to Pegasus Dos Dinossaurios near Fatima where in 1994 palaeontologists made a discovery of sauropod tracks which you can now view. Unfortunately on route we discovered that they are only open from March – Sept so quickly re-programmed the sat nav to take us to Nazere