Arriving at the parking area which is basically a huge car park with a limited number of spaces dedicated to motorhome parking. The car park houses the market on some Saturdays however as we arrived on a Wednesday this didn’t apply – instead there was a circus just setting up in the middle (I think it’s the same circus we saw in Tomar ironically on another large car park a few week earlier). Maybe we should get their schedule as it’s guaranteed that we can at least park nearby! From the posters we ascertained that we had a couple days before the circus started so trotted off to the sports centre next door to pay our dues. The receptionist asked us where we’d parked as apparently there are only 2 rows dedicated to motorhomes when we asked her what happens if you park elsewhere she just shrugged, so we still don’t know whether A) the motorhomes dotted elsewhere had paid B) whether they would be at some point asked to move off.

Just before we went out to explore I nipped off to use the loos on site and found a French man in there – having turned the tap on the sink 180 degrees he was filling his water bottles up to in turn fill his motorhome. When I came out of the loo (having had a minor OK major panic at having go locked in – the handle had fallen off on the inside fortunately I found it on the floor under the sink and was able to temporarily re attach it to let myself out – needless to say I didn’t use the site loos again) the same French man was now filling his water bottles from the tap used to wash out toilet cassettes!! He is obviously now broke from having spent around 70 k on a motorhome and can’t afford the 2 euros for the water. YUK!!!!

As we’re located only around 2KM’s from the centre of Lagos we decided to go exploring on foot today. I had previously visited the town around 3 years ago when I had been staying in Carverio on a short break away with my Mum and had taken the opportunity to visit a customer we had at the time located just on the outskirts. The town is partly walled and still retains and old charm around the tiny cobbled streets. Although like most major resorts on the Western and Central Algarve it has somewhat sold its soul to tourism. Mostly on this trip I have stayed out of shops (other than supermarkets) as we have limited space and limited weight that we can carry so it kind of gives shopping another meaning !!! I never thought I’d hear myself utter such words – I have recently thrown away a pair of shoes though so watch this space. On this occasion though we popped into Ale Hop (which I believe to be a Spanish chain of shops selling all sorts of bits and bobs from scarves to phone cases and more). We did manage to find a scarf for Paul (its chilly today) and I also checked out the Mankini for future reference – in Portugal the swimming pool rules are that men have to wear fitted shorts or swimwear not the baggy type (Oh and a swimming cap) – well it’s an option!!!! 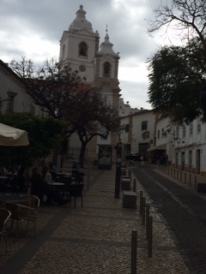 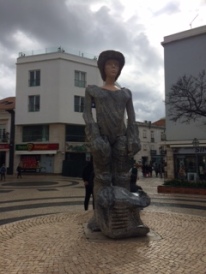 After wandering the narrow streets for a couple of hours our stomachs were telling us it was time to eat so we headed for a restaurant and opted to sit indoors rather than out. We have been trying to eat both lunch and dinner later out here as in non-tourist places in Portugal a lot of the restaurants don’t even open until 8pm. We are now generally having lunch at 2pm and dinner around 7pm – well it’s a move in the right direction. We both chose to have the chicken piri piri – which is either chicken roasted in a chilli type spice (as it was here) or served with Chilli oil so you can choose how hot you want it. We both prefer the latter as you can really spice it up then. Before my Mum left she bought us a bottle of the chilli oil so I made us chicken breast piri piri style this week (we both said it bettered the restaurants!! Mainly thanks to Mums oil not my cooking I’m sure).

With a belly overfull with food (we’ve also been eating less food and had both just cleared our plates so could hardly move) we went in search of the Old Slave Market. After hunting around for a few minutes we realised we were stood right outside it. A slightly unremarkable building and all locked up _ looks like they may have already sold out today then!!!

We strolled back towards Boris along the water front where there were a few stalls that had set up mainly all selling the same scarves, jewellery and cotton throws. We’d been in search of something to cover our seats in Boris in the summer when we will no doubt be plastered in sun cream and after finding a couple we liked I went straight in for the haggle. I obviously need more practice because despite trying it on 3 stalls they were all sticking to their price of 10 euros each even if you have 2. I relented and purchased them anyway. The waling off trick just didn’t cut it here – I consoled myself with the fact that maybe it really was there very best price after all!

We strolled back to Boris and flicked on the hot water ready to have showers. The previous evening we had managed to blow a fuse by plugging a couple of devises in to charge in one of the 12v sockets – at the time it hadn’t seemed like an issue as we’d got spare fuses with us so replaced the offending one and all was good again. However after one shower (fortunately I went 1st) the control panel was telling us that the leisure battery was almost flat! As we have had very little need for electric hook up (last time we plugged in was about 4 weeks ago) we are relaying on our solar panel to re-charge our power. On checking the solar control panel it was telling us another story that the batteries were being fully charged. After some eye rolling and scratching of heads everything but the lights was turned off (Paul was going to have to remain smelly for now) we realised how much we have to learn about this motorhoming game. As complete novices we really haven’t got a clue so I quickly posted on the Bailey owners group on facebook seeing if we could find someone with greater knowledge than us (it shouldn’t be that difficult). We very quickly got a couple of answers back 1) suggesting we check the water in the battery 2) suggesting various checks etc most of which we didn’t know how to do. One of the members Jeff Botherway just happens also to be a service engineer so passed his telephone number on for us to call him the next morning and he would talk us through it. What a generous gesture which just goes to show that there are lots of people in this little community of motorhomers willing to help each other out. I hope in time as we become more knowledgeable we can pass things on for someone else’s benefit. The following morning Paul checked on the battery status and all was well it was charging again (in fact already up to 96%) he decided to phoned Jeff anyway in case he could offer any further advise and talked through the various possibilities of what could have caused it. Armed with a list of things we may now need to ensure we could check it in future we went off in search of a car parts shop. It appears these are in short supply in this area so our 1st stop was at a boat supplies shop on the marina. Unfortunately they were only just getting ready to open for the season so couldn’t help us with our list of purchases but did inform us that we could get the distilled water in any supermarket. Whilst looking for said car parts shop we happened on a Chinese shop (these are now dotted throughout Spain and Portugal and sell all sorts and everything from inflatable boats to electrical devises and pots and pans to tools). This one was certainly well stocked and ½ hour and 22 euros later we were armed with:

2 tubes of silicone (one clear one white) to fix a leak in the shower area!

Maybe we should have bought all these things with us but with a new motorhome we didn’t realise we would need them. We still need to work out a way of getting into the batteries (hence the mole grips these may be teamed with a coin to open them up). Paul later tested the solar amps and all seems to be ok so were a little perplexed as to why we had the issue yesterday, but very grateful we no longer have it.

After having lunch alfresco today (it was a little warmer and brighter) which consisted of a sandwich and cake each, sat on a bench overlooking the marina, we ventured towards the walls of the old town armed with our shopping (should have thought that one through!). Ambling through the old streets we came across this little place just getting ready to open for the season. Didn’t manage to get Monkey Boy to pose for a pic but took one anyway.

The walls around Lagos 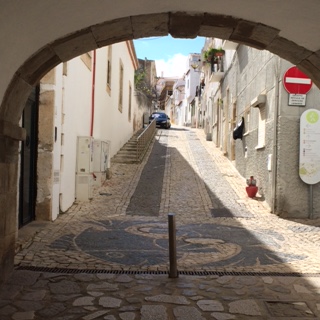 Strolling back along the harbour side were lots of stands promoting various boat trips – one of which actually had takers (It’d need to be at least 10 degrees hotter and sunny to get me on a boat). Two boats were off Dolphin watching – or as Paul and I found out on a previous Whale watching trip in Fuerteventura often these trips should be called spotting not watching. Two hours on a boat feeling sea sick and only seeing one flying fish taught us that!! I hope the brave people that had gone out today were luckier than we were.

We had new neighbours when we arrived back at Boris and as they were fellow Brits I stopped for a quick natter. They had been parked in the middle of the car park and noticed a sign prohibiting motorhomes so quickly relocated next to us as they had had an expensive similar experience recently when parked in Estapona for a couple of hours. Although they had parked there the last 2 years when visiting this year there was a sign prohibiting motorhomes that they missed and got a hefty 100 euro fine. Although we have mainly parked in authorised MH parking areas we know it’s not always possible so will certainly be vigilant and check for signs just in case.

A big part of this trip for us is the food (and of course the wine although we’ve been laying off that recently to dry out a little after our week of drinking with the rellies) and we love buying fresh ingredients and experimenting. Tonight was fresh prawns cooked in chilly and ginger served with a fresh salad – I have to say it didn’t disappoint.

We are moving on again tomorrow and are thinking of going to a wild camping spot at Ferraguda just across the estuary from Portimao although the weather forecast is not looking good so this may change in the morning.

Until next time all