Although we have a very loose plan of places that we would like to visit in the next couple of weeks this often changes and this occasion was no exception. Our discussions on Thursday evening in Lagos were that we would head to Ferragudo which is a small village across the estuary from where we stayed recently at Praia Da Rocha. When exploring we had spotted motorhomes parked up over there right on the waters edge so had added it to our list. The Sat Nav was set and after doing the usual emptying of dirty water (a blue job) and filling of clean water (a pink job) and programmed to head the few KM’s down the coast, however as we pulled into a fuel station to fill up the heavens opened and according to the forecast it was in for the day. Parking on sand therefore didn’t now seem like a good or sensible plan so whilst sat on the forecourt a plan B was decided on. We would head inland to Silves, a small town on the tourist trail, set on a river with an imposing castle overlooking the narrow cobbled streets.

We reset the sat nav to take us to one of the towns Aires and ½ hour later we were there. The Aire looked packed with motorhomes but as we  had driven into town we’d spotted a few other motorhomes parked on our left hand side. We about turned and headed towards them only to find that they were actually just parked in a car park outside another designated motorhome aire which was also rammed fuller than full. With no alternative we decided to join the half a dozen or so that were parked outside and keep our fingers crossed that we didn’t get moved on (we later found out that only last week police were actually moving them on from here). With the rain now pelting down after checking the cupboards to see that we weren’t going to starve (we had plenty of cheese and  the wine to go with it) we decided that we would leave our exploring until the following day. There’s something quite cosy about being inside Boris when it’s raining heavily outside (although it’s not good if it’s the middle of the night when it happens as it’s like being inside a biscuit tin and even the lightest shower can sound like its hammering down as it is magnified 10 fold).

So the rest of the day was passed with lots of reading and catching up on a few work tasks. We spread out a selection of local cheeses and opened up a box of wine that we had bought at Lidl last week. We had debated whether to risk buying said box as it was 5 Litres and we didn’t know whether it would be any good or not, but figured that at 5.79 Euro it was a risk worth taking and although we are not wine connoisseurs we are particular and won’t just drink anything (honest), well I’m glad to report that it was more than passable – in fact very nice. At that price Paul will be having it instead of milk on his cereals!!! Oh and by the way just in case you also want to buy some for your cereals it’s called Terra De Selmes.

Saturday morning the sky was still black and although not persistent rain there were some heavy showers around. As by this time I was starting to get cabin fever I decided to gather our dirties and head for the launderette whilst Paul caught up on a few other things on the ‘To Do’ list like filling of batteries etc. It would seem that lots of other people had had exactly the same idea of what to do with a wet Saturday morning and the small launderette was full to bursting. There was just one machine free so I pushed in as much of our stuff as possible and quickly realised that I would just have to sit it out until a second machine became free. With only 8 washing machines and only 2 dryers there was somewhat of a backlog but whilst there for my 2 plus hours I happened to find out some very useful information from various people who had been doing this a whole lot longer than us and so came away with restaurant recommendations, where the live music is in town and information on another aire in Silves we didn’t know about. It’s amazing what you can find out over whilst doing your weekly wash!

Fortunately the weather brightened up and although we needed winter coats as well as hats, scarves and gloves, we were able to go out for an afternoon walk around the town. I can see whilst Silves in on the tourist trail as its pretty narrow cobbled streets are overlooked by a huge castle which dominates the skyline. On a Saturday at the end of February though almost all the tourists in town are from the various motorhomes so it felt like we almost had it to ourselves. 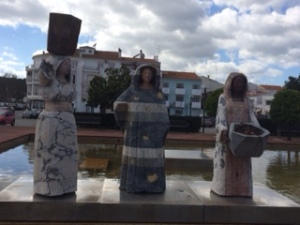 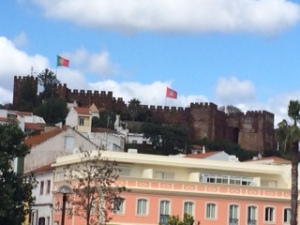 We decided to go to one of the recommended restaurants in the evening and headed up to Casa Velha. Mike (who we’d chatted to earlier in the launderette) was in there with his wife Tina and their friends Dave and Maureen so we joined them. Paul and I had the special  menu which was a 3 course meal including a bottle of wine, olives and bread & coffee for 7.50 Euro (I just don’t know how they do it). We started with soup – Paul had the vegetable, I had the fish and they were both very tasty. For main I had swordfish Algarvian style (which is in a tomato based sauce with peppers and onions), and Paul chose ribs. Paul dipped out of desert but I found space for a slice of biscuit cake (which was like a light tiramisu). The others were regulars at the place (and who can blame them at that price) in fact Dave and Maureen have been coming for around 10 years and eat there most nights when in town! The conversation flowed along with the wine and so after dinner, just about able to move we then headed to Art’aska bar which had a live band on. We finally headed home after far too much of the Vin Tinto at around 1am. I think I need a note from my Mum to say I’m not allowed to play out with the older kids any more based on how my head was the next day!!!

After a slow start on Sunday morning (I wonder why) we finally got out of the door and walked off the grogginess from the previous night. The sky was blue and the sun much warmer, although the wind helped blow away the cobwebs. On the way back a quick trip to the supermarket fish counter and with much pointing and nodding we had dinner for tonight in the bag. Fish with rice – don’t ask what sort as we don’t know!

Like a lot of other European countries that have a warmer climate Portugal encourages its population to stay fit and has lots of outdoor sports facilities such as gyms, circuit training and cycle/running tracks. As there was a track right by where we were parked I thought it was a great opportunity to get acquainted with the roller blades I had bought in the UK for the trip. Most of my family and friends had had belly laughs at my expense when I’d described trying them on in Decathlon and skating up and down the store aisles. I haven’t skated since I was a kid and then of course it was quads (roller skates with 4 wheels one on each corner) not 4 in a straight line as I have. Worried that he may have to do a drive to the local hospital Paul insisted that I wore my elbow, knee and wrist pads as well as my cycle helmet – he obviously doesn’t have much faith in my skating abilities and who can blame him. So fully geared up I gingerly walked the dozen or so steps across the grass to the track and I was off – very slowly at first but I did get quicker. I did pass others that were all also new to roller blading but they were all under the age of 10!!! Slightly embarrassed I picked up speed and hid behind my sunglasses so that perhaps they wouldn’t notice that I was a little older than them!! I have to say I’m now hooked and couldn’t wait to go out again the following morning before we left. I can’t wait to be somewhere again with a cycle path as I cerrtainly don’t fancy trying them on the cobbles. 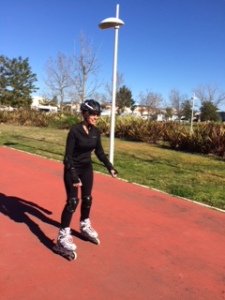 As the weather is set to be good this week we are backtracking and heading next to Ferragudo (at least that’s the plan at the moment).

Spring is only round the corner back in blighty now folks so hold in there; you will be seeing those buds soon.