After a couple of weeks travelling along the coast we decided to head in and up into the Sierra Nevada mountains. Consulting the map we could see the route was as expected a winding one, but as our experience of Spanish roads so far was a positive one we decided it was worth the risk. Deciding to go the whole hog and heading first off to Trevelez which is reportedly the highest populated village in mainland Spain, at nearly 1500 metres above sea level.

Winding Mountain roads on the way up to Trevelez 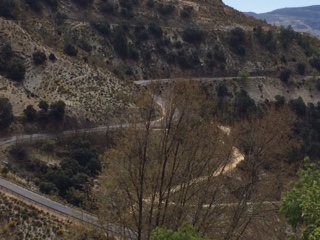 Although it was also reportedly a pretty white washed village our main reason for visiting was because it is known as the home of Jamon, yes thinking of our bellies again it was a must do. The mountain road were a little narrow and challenging in places but the spectacular views and scenery made it all worthwhile. Our parking spot for the night was going to be in yet another car park (hey we are not that fussy as long as we feel safe and can get a decent space to fit Boris in) right at the top of the village. With a fresh water tap right opposite the parking area we took the opportunity to not only fill Boris with water but all available drinking bottles too, after all this was fresh mountain water bottled not too far away from where we are!

Being in the upper village the views were stunning and we could clearly see the snow on the tops of the mountains. The air had an altogether fresher fell to it, so we layered up with sweat shirts, coats and scarves before venturing out. After walking to the top to take photographs of the views we headed down to the lower part of the village for the real pull of the place the Jamon. 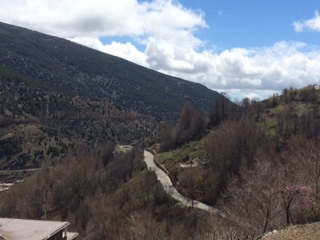 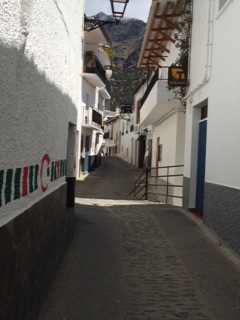 We selected a restaurant which had the word Jamon in it’s title so thought we’d have a pretty safe bet at being able to sample it there. The ceiling was covered in dozens of Jamons hanging doing whatever they do to get them ready for future consumption. Our limited Spanish meant we didn’t really have a good understanding of the menu so we just asked for a plate of Jamon to try. A few minutes later 2 rather large plates filled with two types of Jamon arrived at our table. Ah something had got a little lost in translation, but not to worry it was here now so we ploughed our way through as much of it as we could and had the rest in a doggy bag to take away. The price tag was a little steep at around 30 euros but we had come here to try the Jamon and try the Jamon we did!!! With full bellies we stomped back up the hill and ramped the heating up in Boris for a cosy night in. 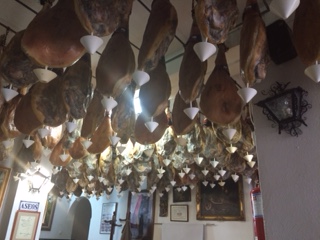 As the village had been somewhat swamped with tourist coaches during the day we decided to set an alarm for the following morning to ensure we had a safe passage back down the winding mountain roads. We headed off around 7.30am down to another pretty Las Alpujarras village called Pampaneira and after a stroll around we continued winding our way down the mountain roads.

Pampaniera and the beautiful scenery on route 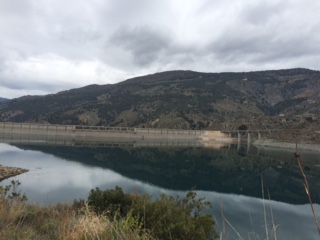 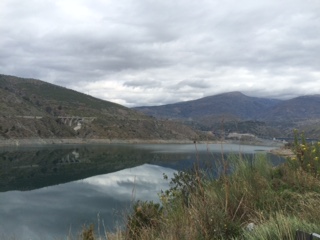 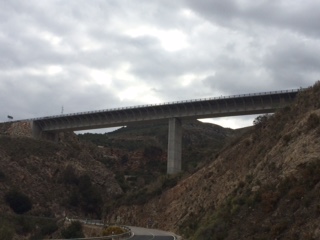 Despite our best laid plans the coaches were already making their way up the hills and several times we stopped along the way to let them by. As we made our way towards Orgiva though a coach came into view around a tight bend ¾’s of the way across the road on our side – Paul pulled over as much as possible but had nowhere else to go to avoid it, with a rather large bang it hit us and we pulled over (as did he) to check the damage. At 1st we thought he’d clipped the back end as well as our wing mirror, but we escaped lightly and only the wing mirror had been hit. As we had mirror guards fitted the only damage was a slight scratch to the surface PHEW. With hearts beating a little faster we headed off to our next destination even more gingerly than before.

Some fellow travellers “The Motoroamers” had recently posted some pics on facebook  from a pretty campsite with stunning lake views and as its location was only around 15km from Granada it was a perfect s for spot visiting the city.  On arrival we booked in for 1 night and as usual when arriving at a campsite and hooked up to electric we quickly used every socket to charge all appliances as well as filling 2 washing machines full with our previous couple of weeks washing. After catching up on chores we planned what we’d like to see and do in the area and decided on staying for another couple of days in order to fit it all in. 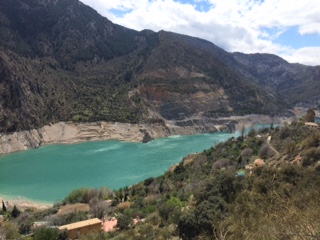 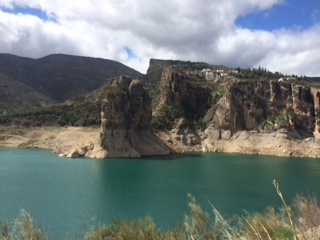 The next day we hopped on the bus into Granada and explored the sights of this beautiful city on foot, taking in the Alhambra, cathedral and Albacin. With only a short break for lunch by 4pm with aching feet we were glad to hop back on the bus and sit down for 40 minutes on the drive back to the site. 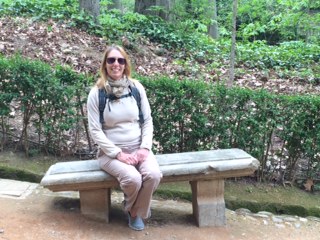 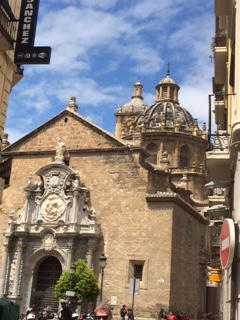 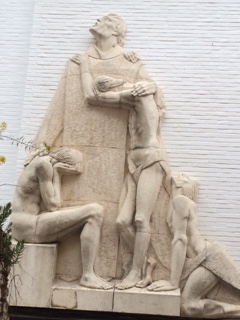 With captivating scenery all around the following day we headed off for a 3 hour walk stopping for a picnic on route. The sun was out and by our return to the site early afternoon it was warm enough to get the chairs out and spend the afternoon reading in the sun. 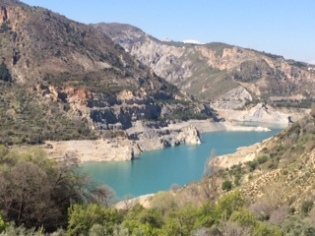 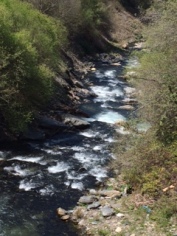 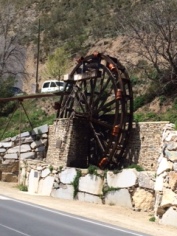 If you’re travelling in Spain and have the opportunity to go up into the Sierra Nevada’s take it as it’s as different world up there and miles away in every sense from the concrete jungles of the coast.

With my Mum due come out to meet us in Fuengirola in around 10 days though we decided to head back to the coast for now, but are already planning to go back inland after she leaves.

Counting the days now though and hoping for a sunny week.