Having sampled some of the welcoming Christmas atmosphere in El Peurto de Santa Maria we were now starting to get a little bit more in the mood. Despite having blinged Boris up for Christmas with the best display of lights we could muster (given that we move around regularly), its hard to imagine that the festive season is upon us. Without all the endless lists of presents, cards and food to buy it almost feels like it could quite easily have passed us by without us noticing. Our plans were to have a couple of days in Cadiz followed by a short trek down the coast to a campsite near Zahora, described as in the middle of a national park surrounded by pine trees it sounded the perfect place to get away from it all. We required an address to have our new electrical control panel delivered to and  our new ACSI book so this gave us that at least.Having previously seeing a couple of posts on a facebook group about how loved the campsite is and how fabulous it is for Christmas we thought we’d give it a try. The coastal area known as Costa De La Luz is a lot more unspoilt and far less touristy than other areas of Spain probably owing to the fact that it is a little trickier to get to especially with reduced winter flight timetables.

So off we trotted to Cadiz, parking in a car park very near to the city which gives motorhomes a discounted rate of just 3 euros a night (GPS 36.538014 -6.290141). We could easily explore the city on foot from this location and did just that on our first day here. The weather was bright and breezy, but it felt pretty chilly in the shadow of the buildings. Cadiz is a compact city and after visiting the tourist info office, with map in hand we were easily able to locate the main sights and spent a relaxing day weaving our way through the old town to the gold roofed cathedral and taking in the walls of the old fort on route. With tired feet we made it back to the motorhome for dinner and a chill out evening. The peace though was somewhat disturbed when we found that the nearby theatre was holding brass band practice that night, followed by a late night (or should I say early morning) at the local discotheque! 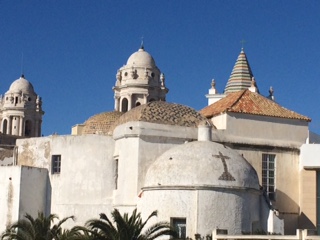 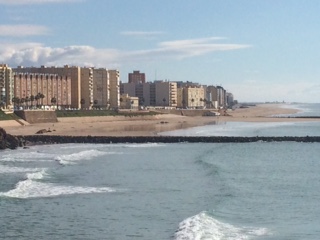 Needless to say it didn’t take us long the next morning to come to the decision that we didn’t really want to spend another sleepless night in Cadiz so after breakfast we packed away and headed off a short way down the coast to a peaceful wild camping spot in Puerto De Santri Petri (GPS 36.390831 -6.207253).After a stop to stock up on groceries at Lidl on route we found the place was deserted other than the odd fisherman and as its a peninsula even though we were just parked at the side of the road there wouldn’t be much passing traffic – perfect. The sun was shining again so after a stroll around the area we sat outside for a while whilst practising our new hobbies, me trying my hand at cross-stitching (I think so far I’ve unpicked as many stitches as I’ve made) and Paul teaching himself guitar (as we were parked alone there were no neighbours to disturb here at least)!

As we had now parked for 4 nights with no services we really now needed to fill with water and empty everything so were off to our Christmas campsite El Pinar De San Jose a day earlier than planned (GPS 36.20087 -6.030597). Having stocked up with food for the Christmas period yesterday we just needed to fill with gas today on route. Arriving on site mid-morning we were presented with a package when checking in at reception,our new control panel had arrived from our moho dealer in the UK, now all we had to do was fit it (well Paul did). With Boris settled in position, Paul set about taking off the old charger unit and fitting the new one (although I did have a very integral role to play in holding the torch), the fitting itself wasn’t that difficult but access under the seat made it all a little trickier especially as Paul has hands the size of a gorillas! With only a couple of very gentle curses the new unit was in place and the BIG switch on could take place. At first all seemed well. Items that we plugged in were charging well, that was until we tried to flush the loo! With red lights flashing and nothing happening it seemed we now had a new problem, along with a continuous bleeping alerting us to the fact that our now full water tank was nearly empty (of course it wasn’t, but the electric system didn’t seem to know that)! Further faffing found that when we unplugged from the mains though our newly acquired issues were suddenly OK. We decided to see what happened over the next 24 hours before making any phone calls.

During this time we got to know our neighbours (Ann & Mark and Steve & Linda) both from the UK and learnt that there were a hive of activities going on over the Christmas period (mostly centred around eating and drinking so right up our street). With a band night for the 23rd, Christmas Carols on 24th and a lunch on Christmas day it looked like the quiet Christmas in the middle of nowhere vision we had of the site was quite different from the reality – result. So over the last few days we have managed to get to know a lot of others on site during the celebrations and have had great laughs whilst sinking a few drinks (OK it may be more than a few, but its Christmas so we are not counting)!!! We have also walked and cycled off our excesses whilst exploring the local area. Our intention originally was to stay here until 27th, but as that was yesterday you will see that our plans have changed. We are still waiting for our 2017 ACSI books to arrive from the UK, these were posted onto us by my Mum on the 19th Dec on a supposedly 3 day track and sign for service. We are now 9 days on and they have still not arrived and the tracking only tells us that they left the UK on the 20th, so for now we are in waiting it out. We will probably have to decide on our next move should they not arrive around new year. 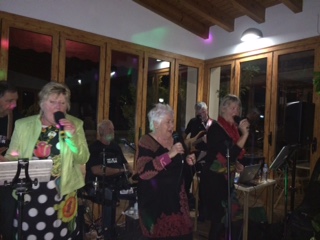 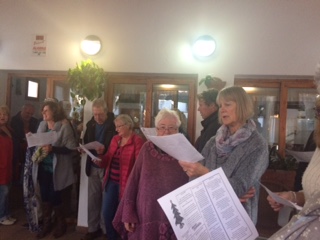 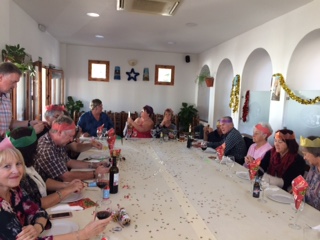 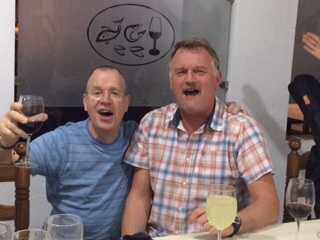 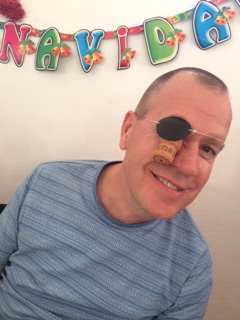 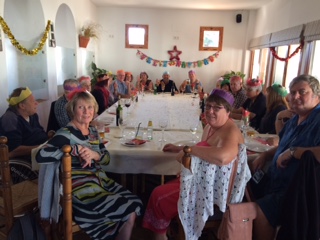 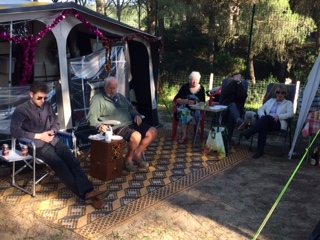 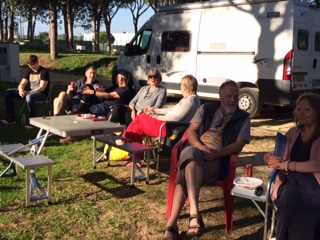 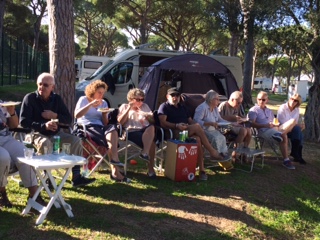 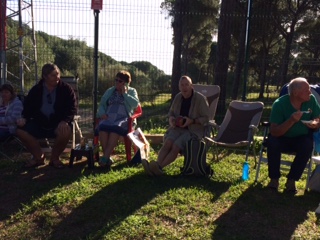 Burning off the Christmas excesses 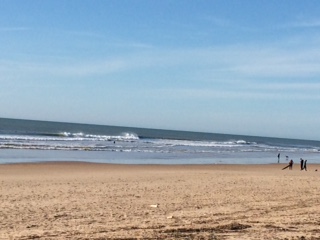 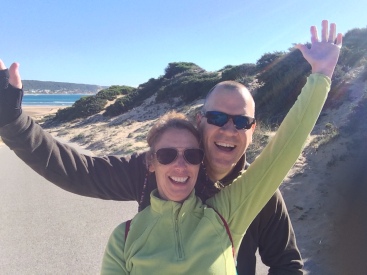 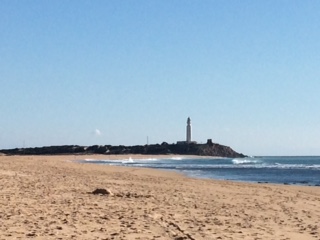 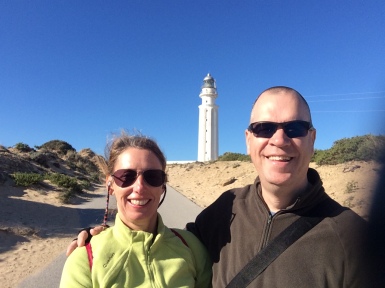 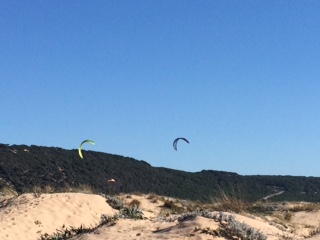 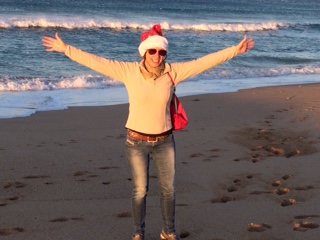 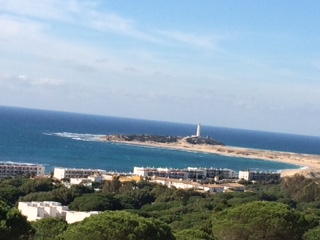 Of course although we have had a superb time here over Christmas we have missed our nearest and dearest and send big hugs and sloppy kisses back to each and every one of you.

See you with our next update in the new year

P.S. Update on the electrics – if we switch the light on in the bathroom before we flush the flusher works!!! P.P.S The dealer now thinks we have yet another faulty charger unit, so we may have to have yet another one (this time pre-tested) sent out!